Nicholson Road is an ongoing photo project aimed at sharing and celebrating the different communities in Metro Vancouver.
0
Oct 17, 2011 11:49 AM By: Robert White 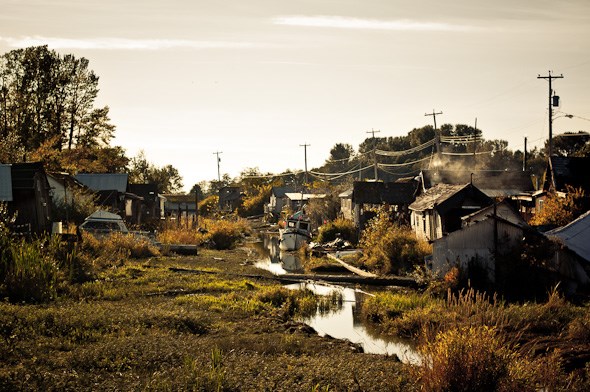 As Jef Choy noted back at the beginning of 2010, the communities around Metro Vancouver are constantly growing, changing, and upgrading. So when you come across places like Finn Slough, which has barely changed a bit, you just have to take a moment or two to remember what the region must've been like back in the 1800's.

Just a little bit of history for you:

Finn Slough, which was previously known as Tiffin Slough, was just another slough along the forested marshes of Lulu Island up until the turn of the 20th century. A number of Finnish settlers, who moved to Richmond in the 1890's looking for land and new fortunes as fishermen, were forced to relocate from Woodward Slough, where No 4 road becomes [the appropriately named] Finn Road. More established farmers in the area decided Woodward Slough would be a good piece in the drainage system for the newly constructed dykes, and so it was dammed off - making it pretty difficult for the Finns to store their boats near their homes.

Moving south, to the closest and most sheltered place with access to the Fraser, they began building sheds up on stilts to keep their nets dry from the shifting tides at what is now Finn Slough. As the years went on, more Finnish settlers came to the area, with much less in the savings department. They began to construct modest homes in amongst the net sheds, and soon a small working village had formed. Keep in mind, in those days the Fraser was teeming with fish and Steveston was lined with canneries. If you wanted to be a fisherman in Metro Van, this was the place to be.

The 1930's to 40's were the busiest years for Finn Slough. With one of the strongest locals of the Pacific Coast Fishing Union (PCFU), and sometimes up to 40 boats moored along its length, the village thrived. That is, until logging became the primary industry and fish stocks began to fall.

Still today, a number of fishermen call Finn Slough home, along with a rising number of painters and other artisans looking for a simpler life, directly tied to the river and the environment. Since 2000, they've been holding an annual "Art about Finn Slough" show to help share the beauty of this tiny little bit of Metro Vancouver.

If you're interested to learn more, be sure to check out the Finn Slough and Finn Slough Heritage & Wetland Society website.

Metro Vancouver Chinese restaurants seek tax break after coronavirus downturn
Feb 20, 2020 4:15 PM
Comments
We welcome your feedback and encourage you to share your thoughts on this story. We ask that you be respectful of others and their points of view, refrain from personal attacks and stay on topic. To learn about our commenting policies and how we moderate, please read our Community Guidelines.