A jubilant crowd gathered at 14th Street and Lonsdale Avenue for the official unveiling of the North Shore’s first public rainbow crosswalk – a symbol of pride for the LGBTQ2S+ community.
0
Aug 16, 2019 4:20 PM By: Brent Richter 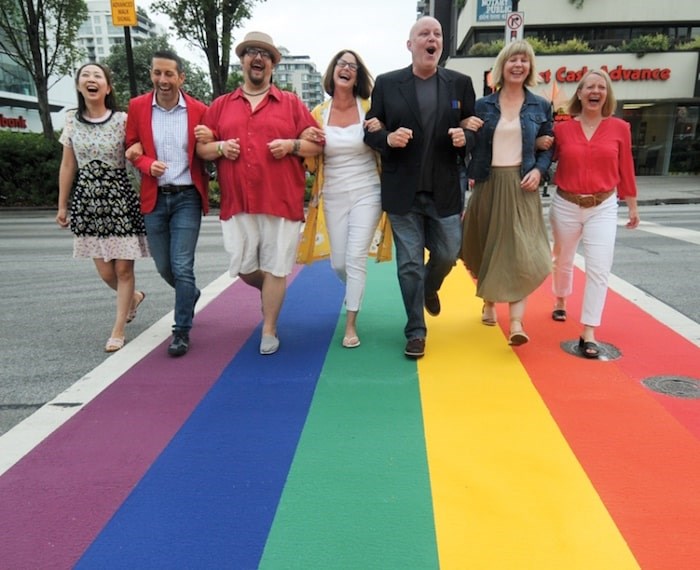 Everything’s coming up rainbows in the City of North Vancouver.

A jubilant crowd gathered at 14th Street and Lonsdale Avenue Friday morning for the official unveiling of the North Shore’s first public rainbow crosswalk – a symbol of pride for the LGBTQ2S+ community.

The crosswalk came about at the urging of the North Shore Pride Alliance, a relatively new group putting down roots. Alliance co-founder Chris Bolton said he hopes it will be a “beacon of light” for both locals and visitors from less welcoming places.

Its location near the city library was strategic, said Bolton, who may also be known by his popular drag queen persona Conni Smudge. Libraries are places of learning and he hopes people following the ROYGBIV road will be inspired to learn more about their queer neighbours.

“You don’t have to love it, but the idea that it’s there legitimizes us, lets people know that we are here and that we are open for conversation. If you don’t understand something, ask,” he said.

Mayor Linda Buchanan said adding the shock of colour to the otherwise concrete and asphalt backdrop signifies what the city stands for.

“In our strategic plan, our city is all about inclusion and diversity and it really is a city for people and everyone. This is just a celebration of who we are as a city, where we want to be, and where we want to go,” she said.

More than planning events like Pride at the Pier, a monthly 19+ pub night, all-ages mixers and gay bingo, the group’s mandate is to make the community more connected, with each other and with supports for those who are needing it.

As a gay man, Bolton said the North Shore feels welcoming “…to a point.”

During the crosswalk unveiling, one older passerby acknowledged the scene, cringed and grunted audibly before moving on.

“I think a lot of the gay people that are living on the North Shore, from Lions Bay to Deep Cove, they feel a bit segregated, a bit singled out and not travelling around and finding their tribe,” he said, explaining the need for an umbrella organization. “I find that people are staying in their own little pockets.”

There might be a lot of knitters on the North Shore, but unless they’re walking around with their knitting bags, we wouldn’t know, Bolton added with a laugh.

The demographics of the North Shore have changed since Bolton was a lad growing up here, and he sees a need for there to be a locally based resource for new and first-generation Canadians.

“A lot of kids are coming into their own but through religious or social beliefs of their families, they’re having a really hard time discussing these new mores of sexuality with their parents,” he said. “I want people to have a place that they can understand and we can facilitate them finding the support that they need.”

Bolton drew attention to the word “alliance” in the group’s name because he wants everyone to feel welcome and included.

“Sexuality has changed over the years. The kids are using that word ‘fluid’… I think people are falling in love with people these days, not really falling in love with their parts,” he said. “We want people to be proud of whoever they are. It doesn’t matter if you’re gay, straight, bi, trans, questioning – these labels are ridiculous these days – but everyone has to have a voice and feel that they belong.”

Although the City of North Vancouver is the first municipality on the North Shore to install a rainbow crosswalk on a street, credit goes to Seycove Secondary students in the Deep Cove area school’s Gender and Sexuality Alliance Club for being first to the idea, when they had a rainbow crosswalk added to the floor of their school in 2018.

The North Shore Pride Alliance is looking for members and volunteers, Bolton said, and info can be found via their website.