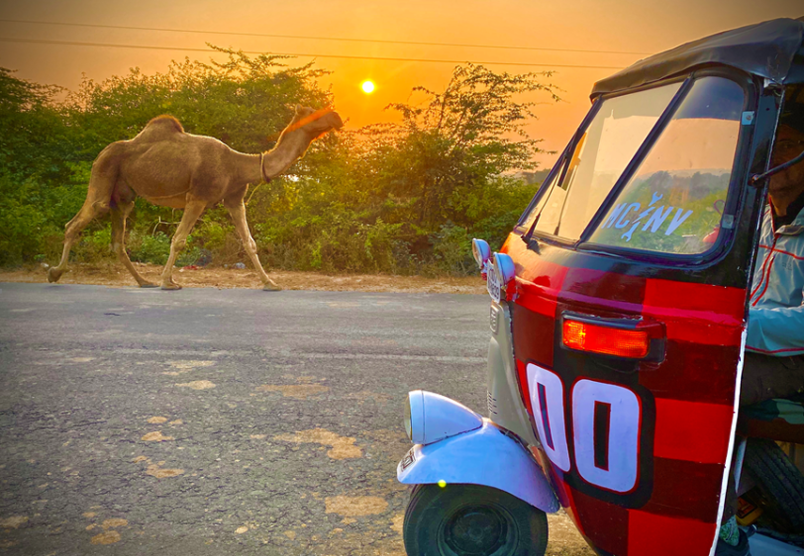 He’s three beers into the night and 700 kilometres from the finish line.

Ross Forman just finished day six of a two-week, any-which-way-but-straight 2,600-kilometre rickshaw race/amble/odyssey across India. At least, it could be 2,600 kms but Forman estimates his team has already added about 400 kms to their trip by taking the very squiggly, roundabout scenic route. And as the sun sets on the Gateway to Southern India, the scene Forman can’t get out of his head is the road into Chennai.

“I have never, in my entire life, had an experience in traffic like I did here,” he says.

As a commercial real estate agent based in North Vancouver, Forman is familiar with backups on the Cut, switched off on-ramps and afternoon traffic that flows like crystallized honey. But none of those experiences can match the sensory overload of two-and-a-half hours of bumper-to-bumper-to-bovine-to-bicycle traffic heading toward the Bay of Bengal.

The smell of diesel was in the air, garbage was littered along the side of the road, bikes slalomed through gridlock while cows moseyed wherever they pleased and jubilant bus passengers made the whole affair feel like a roving street fest.

“Everybody in buses has their hands out the window and they want to shake your hand,” Forman says, laughing. “You’re somewhere between a rock star and a hero over here.”

Forman is in the middle of a race, of sorts.

A little more than six months ago one of Forman’s clients directed him toward The Adventurists. Self-described “purveyors of chaos,” the United Kingdom group organizes purposefully unorganized races by horse, boat, and rickshaw. In the case of the rickshaw race, The Adventurists challenge contestants to “take on the world in a marginally glorified lawnmower.”

For Forman, it was too good to pass up. As a director at Athletics 4 Kids, he immediately pitched the idea of doing the ride as a fundraiser.

A4K executive director Sandy Hancock recalls that her initial reaction was something like: “Oh my god, you have to be kidding me,” followed by: “Does your wife know about this?”

But given Forman’s status as a part-time adventurer (he and friends recently crisscrossed Vietnam on motorcycles), as well as support from his wife, Hancock quickly relented.

Forman has so far raised $23,600 for A4K through canadahelps.org. That means about 118 B.C. kids will get to play the sport of their choice, Hancock explains.

“You picture their little faces all sitting in a classroom – it’s a lot of kids,” she says.

Although registration fees vary from sport to sport, the average sport grant is about $200, Hancock explains.

“The demand for our service is not getting smaller, it’s getting bigger,” she says.

Once Hancock was on board, Forman set about recruiting four friends who wouldn’t be dissuaded by the prospect of riding 8, 12 or 16 hours a day, “depending on your breakdowns.”

According to The Adventurists’ official website, the rickshaw is powered by a two-stroke, single cylinder, forced air cooled hamster with the horsepower equivalent of one family dog and a top speed of 55 km/h – assuming you’re going downhill.

It’s a “three-wheel beater” that drives – when it drives – like a golf cart, Forman adds.

They’ve had about eight or 10 breakdowns so far, he estimates, noting his gratitude that two of his travel companions are mechanics.

The event started in Jaisalmer in the northwest of India. After a freezing, sleepless night in the desert and a day spent riding camels, Forman moved to the starting line of the race.

It was a big, open area cluttered with 85 rickshaws, some of which had 24,000 kilometres on the odometer.

After a crash course in handling the three-wheeled golf carts, the race to Kochi began.

“There’s no rules,” Forman says. “There’s nobody you can call and say, ‘Hey I’m stuck, I got caught by the police,’ which we did tonight.”

Their rickshaw had lurched past a red light when they were pulled over. But after stopping them the cops shook their hands, posed for a few selfies, and sent the merry travellers on their way.

“I’ve never been involved in so many selfies,” he muses.

He and his friends have lost a windshield, been swarmed by enthusiastic sports fans during a cricket game, and pulled into a Marriott hotel just ahead of a Rolls Royce.

Forman has woken up to the kind of smog Los Angeles used to be famous for. He’s seen wild dogs, monkeys and goats milling through trash piled on the side of the road.

But what’s impressed him most about India is the kindness of the people. It seems like everyone wants to be your friend, he notes.

It’s late in India when Forman finishes chatting with the North Shore News. He’s got eight days to cross the country again, heading east this time. It’s 700 kilometres to Kochi. Of course, he notes, that’s only true if you go in a straight line.