Burnaby resident furious at city for cutting down old-growth trees

An angry Burnaby resident is writing to every politician she can think of, raising the alarm about trees she says the city took a chainsaw to unnecessarily.
0
Aug 8, 2019 10:52 AM By: Chris Campbell

A City of Burnaby project to replace a culvert started off so innocently for Catherine Wilson.

Then it escalated to the point where she is writing to every politician she can think of raising the alarm about trees she says the city took a chainsaw to unnecessarily. 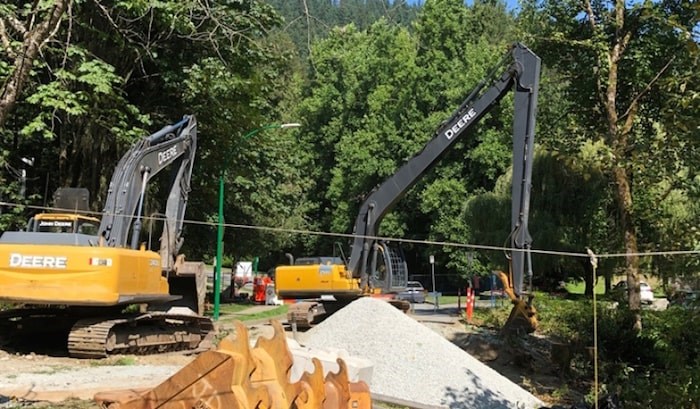 Machines work to clear material for the Ash Grove culvert project in North Burnaby. An area resident says too many trees were cut down, and without sufficient warning. Photo by Chris Campbell/Burnaby NOW

The project is culvert rehabilitation work at Ash Grove Crescent in the Forest Grove neighbourhood in North Burnaby. The culvert work was done over a stream that is part of the Stoney Creek tributary system.

Wilson told the NOW that area residents received a notice from the city about the project, but says they weren’t properly warned about the kind of tree clearing that would take place.

Wilson says it was shocking to see a swath of trees clear-cut by the city.

“A huge amount of old-growth trees were cut down in the first wave and then day by day other trees were being removed,” Wilson said. “Now all green is completely gone in a large area. When I spoke to the department of engineering, they said these trees needed to come down to replace the culvert, but the amount of trees removed is a huge area that is larger than the culvert being replaced.”

“It is heartbreaking to watch the squirrels and birds every night return to the area outside our back door and continue on,” she wrote in one letter. “Although they are adaptable, they are affected. My neighbours and ourselves are concerned over the low-lying vegetation being so exposed to the sun as they are shaded plants and will likely be effected by so much removal.”

Wilson received a written response from May Phang in the City of Burnaby’s division manager of engineering projects. Phang described the project as “environmental improvements for fish passage and migration by enhancing the existing structure from a hard fully enclosed concrete culvert to an open-bottom fish-friendly culvert that will include re-planting and landscaping.”

Phang admitted in her written response to Wilson that the city’s communication on the project was “unsatisfactory.”

“We recognize that the previous notification letter sent out regarding construction activities was unsatisfactory and we are striving to rectify this by issuing an updated letter to residents with more details on the project,” Phang wrote.

The city has faced criticism in the past year for what residents have said was poor communication about tree-cutting projects in which old-growth trees were cut down at Central Park for a pathway project and cherry trees on Boundary Road.

Phang wrote that for the Ash Grove project, the cutting of trees was necessary.

“Part of this project includes removing trees that had grown on top of the existing culvert, which due to their location would be hazardous if left in place as there is risk of them potentially collapsing or causing structural damage,” Phang wrote. “Before any work was carried out, an arborist report and a tree nesting survey were completed by 3rd party consultants to determine the extent of removal while trying to minimize impacts. As the project continues, there will be on-going assessments of tree impacts. The City has an active tree replacement program in effect and will be re-planting new trees and/or shrubs in suitable locations accordingly.”

Wilson says she is skeptical that this many trees needed to be cut. She is also concerned about what will replace them.

“We are wanting some accountability and a detailed projection of replanting, not just spray grass and a few bushes,” she said.

The city says area residents will be updated in more detail once a new assessment is completed.