Order of Canada recipient Jean Swanson just before she was arrested at the Burnaby Mountain tank farm owned by Kinder Morgan.
0
Jun 30, 2018 6:30 PM By: Chris Campbell 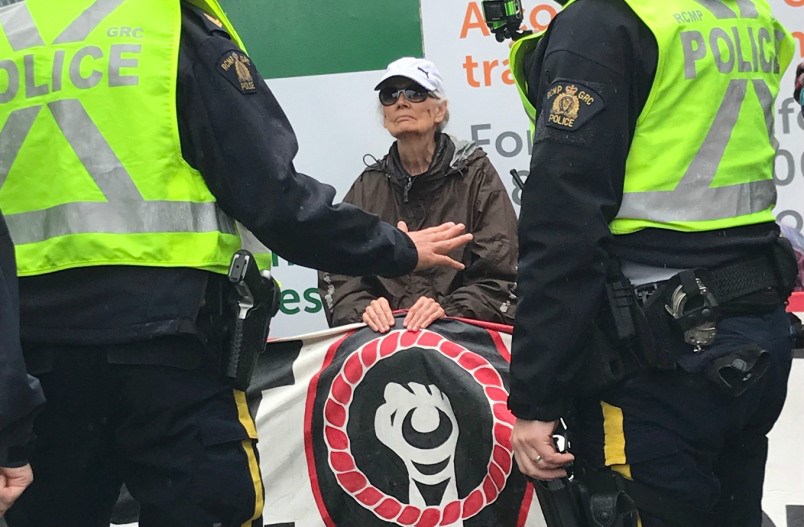 Order of Canada recipient Jean Swanson just before she was arrested at the Burnaby Mountain tank farm owned by Kinder Morgan. Photograph By TZEPORAH BERMAN/CONTRIBUTED

At least nine people were arrested Saturday (June 30) afternoon at the gates of Kinder Morgan’s Burnaby Mountain tank farm in the first mass arrest since a beefed-up injunction was approved by a judge.

Included in the group of people arrested was Order of Canada recipient and current Vancouver council candidate Jean Swanson, who is 75 years old.

She could face as much as seven days in jail and a hefty fine.

Morgan McGinn and Susan Lambert were among the others arrested alongside Swanson.

Lambert is a retired teacher who is the former president of the B.C. Teachers’ Federation. She told the NOW that the risk of going to jail definitely “gave me pause” but she did it for her grandchildren.

“It’s like trying to stop a freight train,” Lambert said after being released by police. “The situation is so critical we have to take action to tell the politicians we don’t want this project to happen. My legacy as a grandmother means I have to do this. I owe a debt to my grandchildren.”