As North Shore Rescue calls go, it was a frustrating one. The team rescued an out-of-bounds snowboarder Tuesday evening after he became stranded in unsafe terrain outside Cypress Mountain resort.
Feb 3, 2021 1:03 PM By: Brent Richter 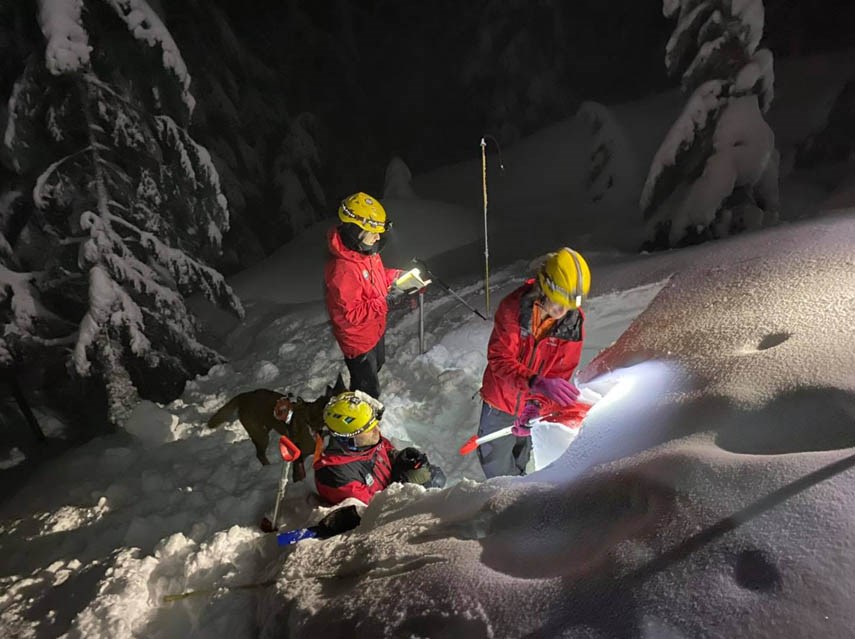 As North Shore Rescue calls go, it was a frustrating one.

The team rescued an out-of-bounds snowboarder Tuesday evening after he became stranded in unsafe terrain outside Cypress Mountain resort.

The 34-year-old headed straight for the border and ducked the resort boundary rope near Strachan Peak on his first run around 5 p.m. Tuesday, said Peter Haigh, North Shore Rescue spokesman.

When he found himself up to his hips in soft snow, he called Cypress Mountain ski patrol for help. They called 911.

By lucky coincidence, North Shore Rescue had a group of members training at Cypress at the time, although high avalanche risk meant they had to first do their own assessment of whether it was even safe to go after him.

The first team to reach the snowboarder gave him snowshoes and hiked him back out to safety. He was about 200 metres down from the Howe Sound Crest Trail, nearing the Montizambert Creek drainage where several out-of-bounds skiers and snowboarders have died thanks to steep cliffs and waterfalls.

Normally when rescue volunteers pull someone out of the creek or snowbank, they’re grateful, or at least conciliatory, Haigh said, but “this guy, not so much.”

“He wasn't very sorry that he'd gone out of bounds,” Haigh said, noting that it was not the subject’s first time ducking a rope. “We like those sort of people to admit that they made a mistake and try and encourage other people not to do that. But he went off in a bit of a huff.”

Haigh said the team is committed to saving lives, regardless of how they're greeted.

Out-of-bounds rescues make up a very small percentage of North Shore Rescue’s overall call volume, although there have been a number in recent weeks.

On Jan. 26, a snowboarder suffered life-threatening injuries after being swept under an avalanche in the same area. And Avalanche Canada has been warning of particularly high-risk conditions over the last week. It’s important to remember that North Shore Rescue members cannot go after a lost or injured backcountry adventurer if the risk to team members is too high.

“There may be some people stuck out there that we would love to go and do something for, but our protocols don't allow us to,” Haigh warned.

Out-of-bounds ropes are placed where they are and clearly marked with signs featuring a skull and crossbones because they are meant to keep people out of deadly terrain, Haigh added.

If and when you do get into trouble and need North Shore Rescue’s help, your first and only call should be to 911, Haigh said.

“And keep off your phone so you've got battery so we can talk to you and find out where the hell you are, and we'll get to you as soon as we can,” he said.

The team recorded 17 calls in January, the highest for that month on record. That’s following their busiest year on record.