You can own a piece of this B.C. Starbucks for just $1 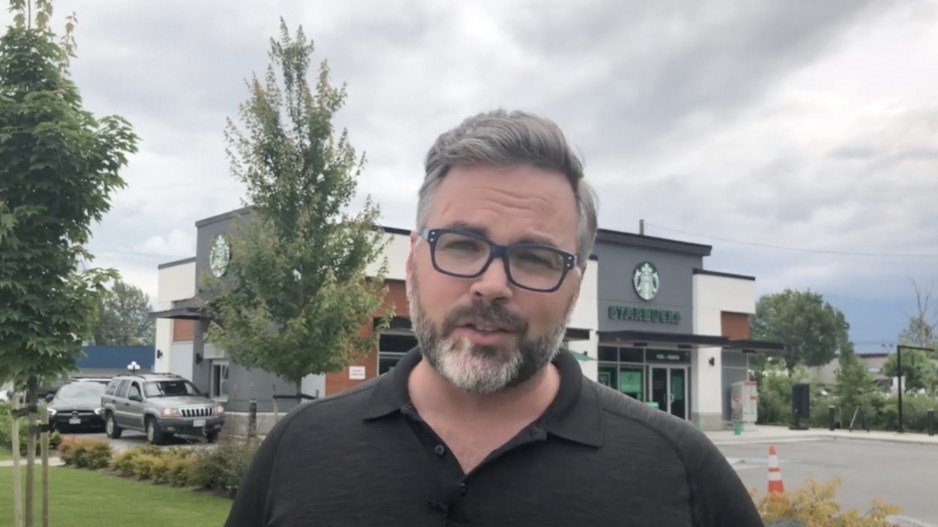 British Columbians will soon be able to buy a Starbucks for $1 – no, not a cup of coffee, a slice of a property with café space that is leased to Starbucks Corp. (Nasdaq:SBUX).

Vancouver startup Addy Technology Corp. plans to put documents online on August 11 for potential investors to read to help them decide whether it is wise to invest in an ownership stake in a 2,100-square-foot Starbucks location at the corner of Yale Road and Airport Road in Chilliwack.

The property is valued in the $2.3-million range, and shares will all be valued at $1 each. The maximum number of shares that each individual investor is allowed to purchase is 1,500.

Investors must agree to own their shares for at least five years.

“Investors can log into their accounts and see rent is paid, property tax is paid, insurance is paid,” explained Addy chief revenue officer Stephen Jagger. “They can follow along and landlord with us even though they don’t have to do anything.”

Addy has created a shell corporation that will buy the property. Starbucks is in a 10-year lease at the site, and it pays insurance, maintenance and property taxes. Profit from the cashflow positive investment is split among shareholders and paid in dividends, or distributions, Jagger said.

“It sounds like a good way to let people participate in the real estate market without being super rich to do so,” said WUTIF Capital CEO Mike Volker, who is an active angel investor who vets startups and invests in about two new companies each month. BIV bounced the concept of buying $1 stakes in real estate off him to get his thoughts on the Addy business model even though Volker had not previously been aware of the company.

“Being real estate, it is probably not super risky over time. Properties' values always go up – I mean they have their ups and downs but in the long term it’s a pretty safe way for young people.”

Volker has one concern about the investment opportunity, however, and that is that the parent company Addy so far is not focused on generating revenue.

Jagger stressed to BIV that Addy does not charge investors in the corporations that own specific properties fees to cover costs for things that Addy owns, such as the technology platform that is used to transact the share purchases.

"In the future there are ways for us to [generate revenue,]” Jagger said. “There are tech-company examples all over the place, where they have chosen strategically to put a hold on worrying about a revenue piece.”

Nonetheless, Volker said that investors in one of Addy’s properties would likely want to ensure that Addy is well-capitalized and profitable.

“You want to make sure they’re around for the long haul since investments may take many years to pay off,” he said. “They should also have an incentive to find great properties.”

Addy’s first crowd-purchased property was a single-family home at 1956 East 13th Avenue in Vancouver that attracted 305 buyers. The plan is to redevelop the site and build a duplex.

Addy executives are eyeing future properties to also sell to a crowd.

Its process is to set up a company that buys the property via a mortgage, as is the case with the Chilliwack Starbucks.

Investors then create an Addy account and set up a digital Addy wallet on Addy’s website. They link their bank accounts and transfer funds to their wallet, and view and sign documents to execute share purchases.

The investment is not eligible for tax-free savings accounts, or registered retirement savings plans, Jagger said.

“Our whole goal is to limit barriers to entry into the real estate asset class,” he added. “If we said it was a minimum of $50, or $500, we’re essentially putting a barrier in place.”

One asset that Addy has is a board of directors stacked with men who are experienced in technology, law and real estate. Steve Evans founded and helped build Pure Industrial Real Estate Trust. Jeff Booth founded and grew BuildDirect. Pascal Spothelfer was president and CEO of the BC Technology Industry Association and then went on to be president and CEO of Genome BC. Keith Spencer earned his stripes as a partner at Fasken Martineau before retiring to join Addy and ensure the legality of its business structures. A final director is Thuan Pham – a former chief technology officer at Uber.

“We wanted to build out a solid board, with people who can help us in a scalable way,” said Jagger, a former BIV 40 Under 40 winner, who co-founded Addy with Michael Stephenson.

Jagger and Stephenson have a history of success in that they founded, grew and sold Ubertor, which helps real estate professionals build websites that have videos and social media components. They have also partnered on other ventures.