An intense dispute between drivers over an East Vancouver parking spot ended in violence over the weekend.
Jan 28, 2019 9:48 AM By: Elana Shepert 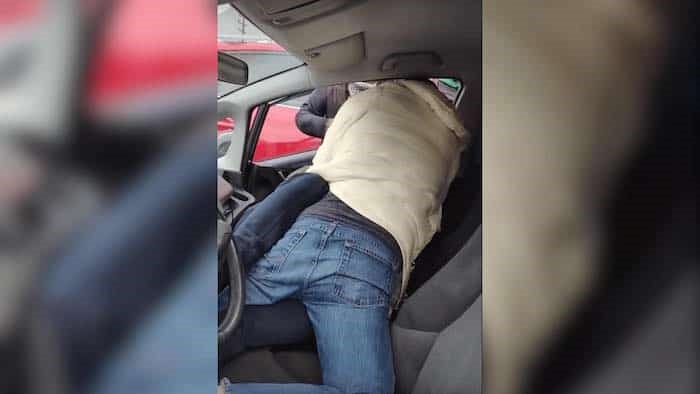 An intense dispute between drivers over an East Vancouver parking spot ended in violence over the weekend.

YouTube user Kazumaco filmed the incident at the First Avenue Marketplace, located at Renfrew and First Avenue, and shared the video to their channel.

The footage begins with a man in a puffy white jacket repeatedly punching someone into a car. In fact, his punching becomes so intense that the person in the car is laid out flat on their back while he is on top of them. The car horn also honks a number of times as they wrestle inside.

Following this, someone yells, "Stop right now! Stop this right now!" and adds that the police are coming. In addition, the other car door is opened and people appear to be trying to separate the individuals who are clinging onto one another.

A woman's voice can also be heard telling the pair to, "Calm down," as well as to, "Just stop it."

Afterwards, the two individuals get out of the car and the man in the white jacket proceeds to remove his jacket while a woman tries to stop him from fighting again.

A number of people are then seen arguing in the parking lot following the violent part of the altercation.

The video is four minutes and thirty seconds long and was posted to YouTube on Saturday, January 26.