Staff did everything they could to make the stranded guests comfy for the night.
Jan 13, 2020 1:37 PM By: Brent Richter 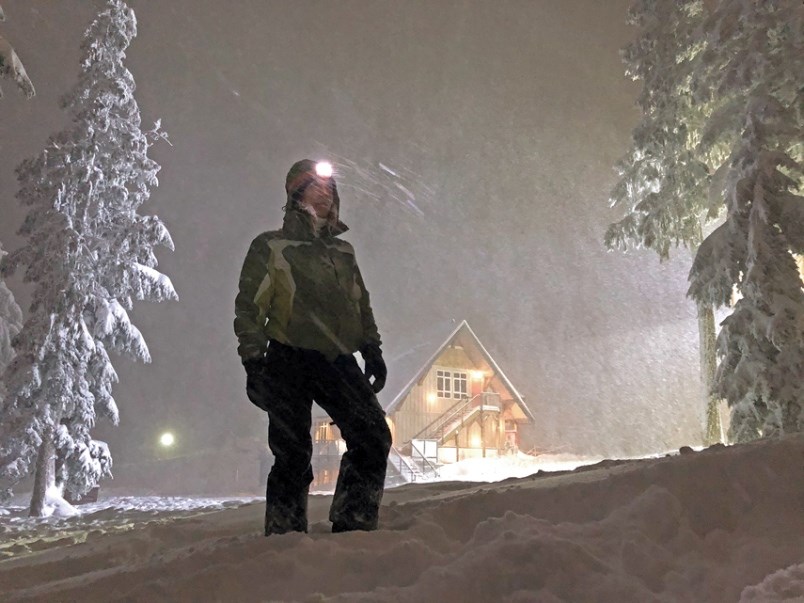 A snowshoer enjoys the fresh dump of snow at the top of Mount Seymour shortly before the road was closed due to a four-car pile-up. photo Paul McGrath, North Shore News

While a dump of almost 90 centimetres of snow made for idyllic conditions on the top of Mount Seymour Sunday night, the road home was decidedly worse.

More than 100 visitors were stuck at the top of the mountain overnight thanks to a four-car pile-up near the first switchback.

The crash happened around 8:45 p.m. as many people were headed home for the night.

“As soon as that incident occurred, everything came to a stop,” said Eddie Wood, president of Mt. Seymour. “During that time, it continued to snow and we were under freezing temperatures. The road became very icy.”

Rather than send more drivers down, resort staff closed the gate at the top and started making preparations to host an impromptu slumber party in the chalet.

Staff opened up the conference room and offered blankets for anyone who wanted a quiet rest, though many stayed up in the cafeteria to chat.

“We fed everybody. We provided beverages - hot coffee, tea, hot chocolate. We did a meal of french fries and chili. And we just made everybody comfortable,” Wood said.

By 2:30 a.m., crews had cleared the crash and the cars stuck behind it. They opted to give the road a fresh plow and a heavy dose of salt and sand before letting the folks stuck at the top back down. The last of the guests were on their way by about 5:15 a.m., Wood said.

Wood was at the gatehouse at the bottom of the hill as resort staff were letting everyone leave early in the morning.

“The mood was very positive,” he said. “Our food and beverage team did a terrific job hosting and making people feel comfortable. And I think everybody realizes that their safety came first for us. And so, by holding people here until the road was safe to pass, there was definitely an appreciation for that.”

In December 2015, Grouse Mountain resort kept more than 300 guests overnight when gusting winds made the Skyride unsafe to operate.

This was the first time Mt. Seymour offered overnight accommodations, but Wood had some suggestions for how it could be avoided in the future.

“We would ask that everybody have proper winter tires when they're travelling the mountain road and if they don't have that, use the shuttle bus,” he said. “And we really appreciate it - everyone's patience last night.”