PHOTO: Base jumper stuck dangling on lamppost over B.C. highway

A base jumper walked away unharmed from a dramatic scene on Tuesday in Squamish.
Sep 11, 2019 11:29 AM By: Keili Bartlett 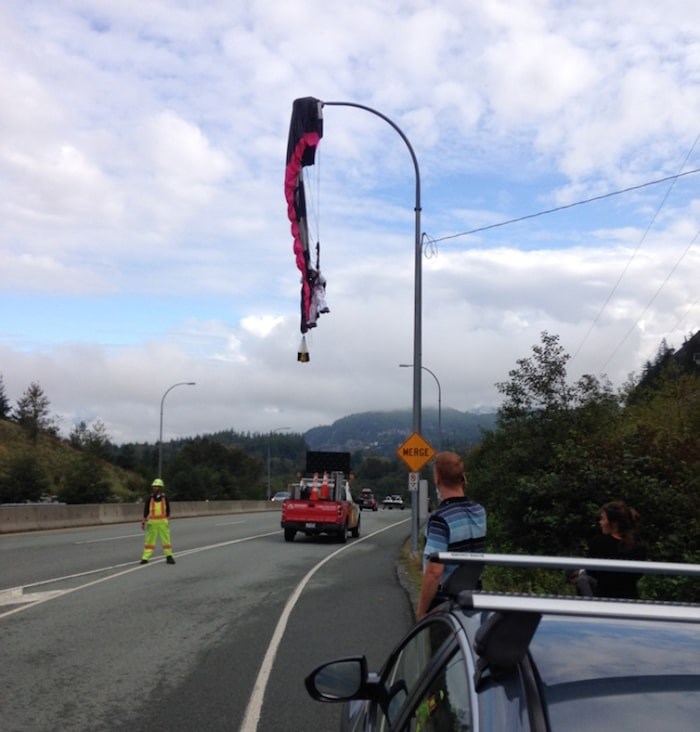 A paraglider is seen dangling from a lamppost over a lane of Highway 99 in Squamish on Tues. Sept 10, 2019. Photo submitted/via The Squamish Chief

A base jumper walked away unharmed from a dramatic scene on Tuesday.

At about 10 a.m. Sept. 10, a base jumper landed and got stuck on a lamppost at the base of the Stawamus Chief and Highway 99. 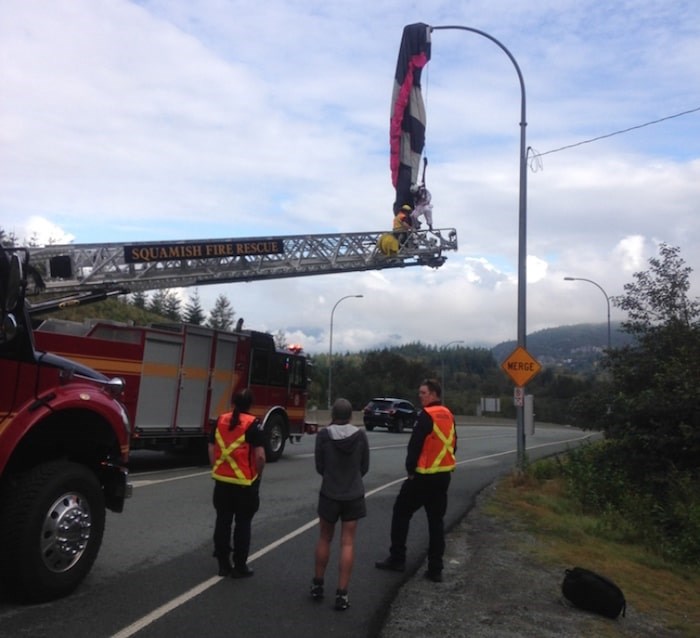 A paraglider is seen being rescued from a lamppost over a lane of Highway 99 in Squamish on Tues. Sept 10, 2019. Photo submitted/via The Squamish Chief

Squamish Fire Rescue firefighters used a ladder to stabilize and remove the woman from the post. The base jumpers was suspended approximately 20 feet in the air above a merge lane on highway 99, but was not injured in the incident, according to Deputy Fire Chief Aaron Foote.

Although initial reports from officials said the woman was stuck while paragliding, Tyler Gillies, president of the West Coast Soaring Club, told The Chief on Wednesday following the incident that she was a base jumper.

"If the person was a paraglider hanging, they'd be hanging sitting like they are in a couch or a chair. This person, you can see, is hanging straight down," Gillies said, describing a photo from the scene of the Sept. 10 incident.

The hang point, where the person is attached to a glider, is different between base jumping or paragliding. A paraglider's hang points, Gillies said, is at the hip, while a base canopy or sky diving canopy has hang points on top of the shoulder.

"Which is also why you can see the person is hanging straight down, because you're hanging from your shoulders versus your hips."

In the photo, Gillies points out, is what looks like a box. It's known as a pilot chute, and used by a base jumper to catch drag and pull the chute out. Paragliders don't use this piece of equipment, because their chutes are inflated before they leave ground.

The person also appears to be wearing a tracking suit or a wing suit, Gillies said, meant to create drag to get the glider away from their jumping off point. A paraglider would wear more tight clothing to be more streamlined to eliminate drag.

BC EHS confirmed they attended the scene, but did not take anyone to the hospital. Squamish RCMP's Const. Ashley MacKay said local police did not go to the scene or create a file about the incident.

This story has been updated to show the woman was a base jumper, not a paraglider as previously reported.