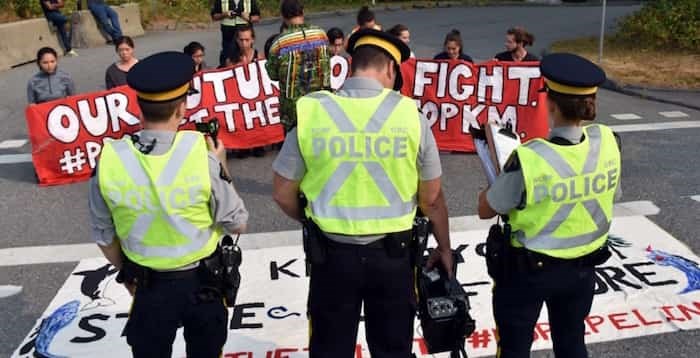 Kathryn Cass, Deb Wood, Kira McLean and Brenda Morrice were all arrested in August for blockading access to the Westridge marine terminal during a week of demonstrations that saw activists arrested almost daily.

“On August 24th, I defied an injunction granted by the Canadian court while I was on unceded land belonging to Coast Salish Nations,” Cass said, according to a Protect the Inlet press release. “In my heart, I was following laws that have been in place long before my European ancestors occupied this land. It is my understanding that those laws include taking care of the health of our land and water.”

The women pleaded guilty to criminal contempt of court and were subsequently sentenced to 14 days in jail on Oct. 30.

The jail terms were among the harshest yet handed down as Crown lawyers have sought harsher and harsher sentencing in an effort to deter further interference with the pipeline.

But now that construction on the project is on hold after the Federal Court of Appeal quashed federal approval of the project, there is no longer any need for such deterrence, according to Kris Hermes, who is providing legal support to the defendants.

“Their argument is that the Crown's sentencing recommendations or guidelines that include imposing jail time for people who were arrested in the month of August is punitive and based on an outdated strategy of deterrence,” Hermes said.

He said the women took responsibility for their actions by pleading guilty and knew they were likely to face jail time when they were arrested, but sending them to jail when protests have stopped is unnecessary.

“They’re not OK with being sentenced to jail time when deterrence is no longer an issue,” Hermes said.

Cass, Wood, McLean and Morrice were all taken into custody following sentencing in B.C. Supreme Court Tuesday. Their lawyer has filed for bail for the women pending an appeal of their sentencing, Hermes said.

Their bail hearing is scheduled for Thursday, Nov. 1, he said.

In an email, a spokesperson for the BC Prosecution Service said: “Crown Counsel will respond in the Court of Appeal to the applications being brought and to any issues raised on appeal.  Because these matters are currently before the Court, it would be inappropriate for the BC Prosecution Service to publicly comment at this time on the merits of the appeals or the appellants’ applications for bail.”