The note offers advice for how best to take care of the stolen plant including watering practices and sun exposure
Apr 17, 2021 2:03 PM By: Cameron Thomson 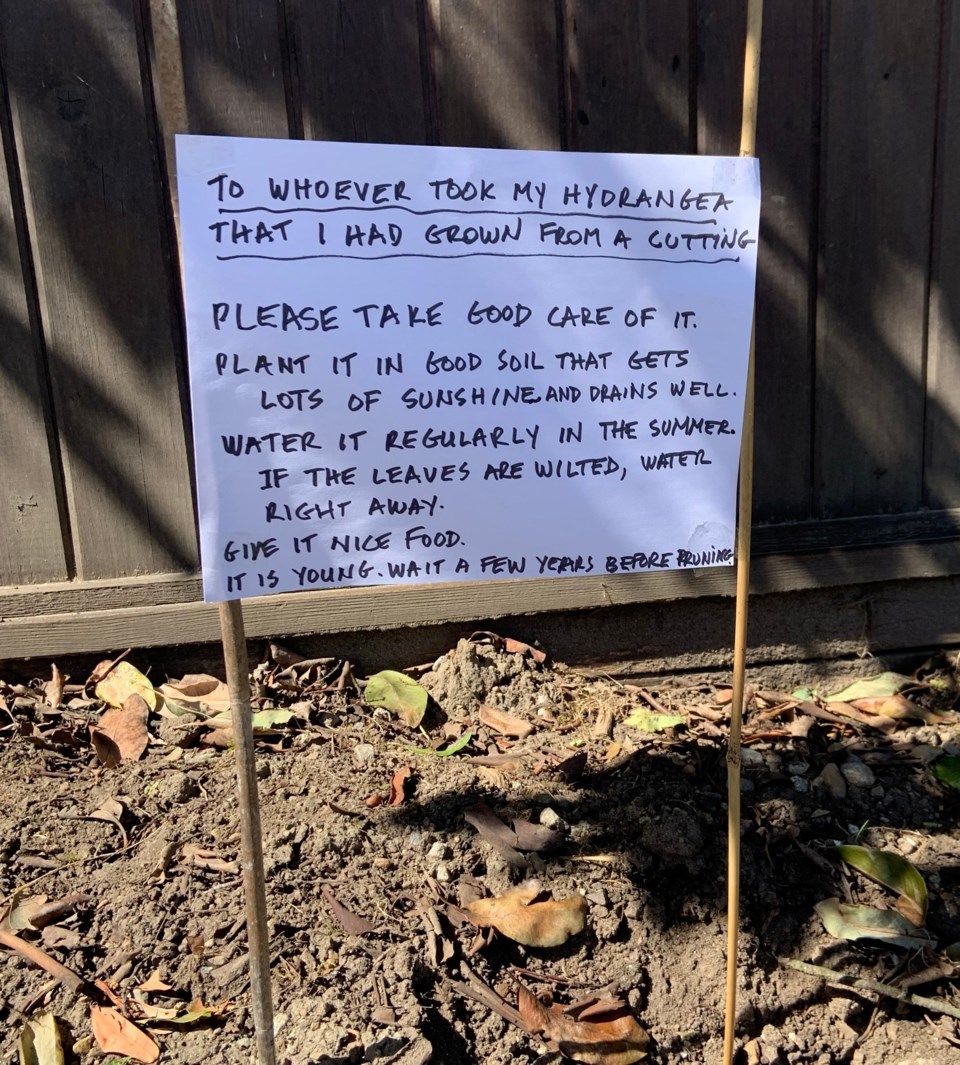 A Vancouver gardener left a wholesome note for the person who stole their hydrangea offering advice for how best to take care of the plant.Reddit user

It’s safe to say that most people who have sunk weeks of work into a project only to have it stolen from them would, given the chance, leave some choice words for the thief mostly consisting of colorful expletives.

That isn’t the route one Vancouver gardener took though after a hydrangea they grew from a cutting was ripped from their yard. Instead, they chose to make sure the plant would be taken good care of in the hands of its new -- albeit illegitimate -- owner. The note was shared on social media identifying its location as somewhere along Lakewood Drive.

“To whoever took my hydrangea that I had grown from a cutting. Please take good care of it. Plant it in good soil that gets lots of sunshine and drains well. Water it regularly in the summer. If the leaves are wilted, water right away. Give it nice food. It is young. Wait a few years before pruning,” the note reads.

Growing a hydrangea from a cutting is no small task. According to The Old Farmer’s Almanac -- a blog centered around gardening and home cooking --  the process involves careful cutting, dutiful maintenance and several weeks of waiting before roots even start to grow.

The note garnered the attention of the simple flower admirer and green thumbs alike with Reddit user RegimeLife asking the question seemingly on everyone’s minds.

“What kind of low life piece of sh*t steals peoples plants?” they asked.

Another Reddit user Heliosvector pointed out that plants are very trendy right now since the coronavirus (COVID-19) pandemic has made gardening a more accessible pastime.

“I sell plants that before would sell for 400 dollars per full plant before covid,” Heliosvector writes. “Now they sell for 700 per cutting. Conservatories have had to up security because people are taking cuttings without asking/paying. Same at garden centers.”

Plant thievery is not a new crime in the Lower Mainland. Last summer in East Vancouver a security camera captured footage of a man making off with a beautiful Japanese maple in broad daylight. A similar story made headlines in August 2020 when a popular South Surrey restaurant kept having the flowers in patio boxes brazenly stolen three times by the same person. Also last year a group of Burnaby residents looking to spruce up their neighbourhood were plagued by bud bandits.

The Better Gardener's Guide suggests some ways to stop your prize petunias from getting uprooted. These tips include putting up a fence, using heavy planters, adding lighting to your plot, installing security cameras (even fake ones) and putting your more valuable plants away from public view.