An off-duty police officer and a woman were stabbed outside a private elementary school on Wednesday in North Delta.
0
Feb 21, 2019 6:37 AM By: The Canadian Press

DELTA, B.C. — An off-duty police officer and a woman were stabbed outside a private elementary school on Wednesday in Delta, B.C. 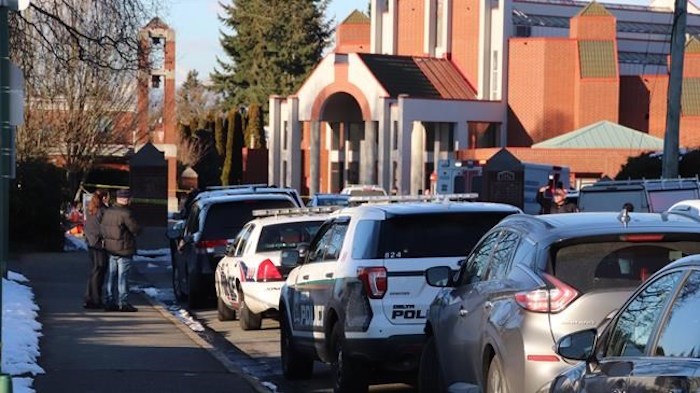 First responders stand outside Immaculate Conception elementary school in Delta, B.C. on Wednesday Feb. 20, 2019. Police say an off-duty officer and a woman were stabbed outside a private elementary school. THE CANADIAN PRESS/Shane MacKichan

The male officer was at Immaculate Conception elementary school in North Delta just after 3 p.m. and witnessed an assault between a man and a woman in front of the school, police said in a news release.

"He intervened, and during the altercation the woman and the officer were stabbed," said Delta Police spokeswoman Cris Leykauf.

Police said later Wednesday that the conditions of both victims are considered to be serious.

The suspect was taken into custody, but police said the scene remained active and advised parents to pick up their children at a location away from the school.

Principal Maurice Jacob said that during the incident, the school went into a lockdown, which students and staff have practised in the past.

He said all the children had left the school and been picked up by their parents by 5 p.m. Wednesday.

Jacob said he could not comment on the incident itself or the identity of the woman who was injured.

Police said more information will be released as it becomes available.

Ernie Saunders, who lives on the 12th floor of a highrise next to the school, said he looked out his window when he heard many sirens.

Saunders said police had a suspect sitting on the grass in handcuffs.

"He's off to jail, I guess," he said. "The lady and the other officer are off to hospital."