A police takedown video has appeared on YouTube that shows a dramatic chase between officers, their canine unit, and a fleeing suspect.
0
Nov 6, 2018 2:55 PM By: Elana Shepert 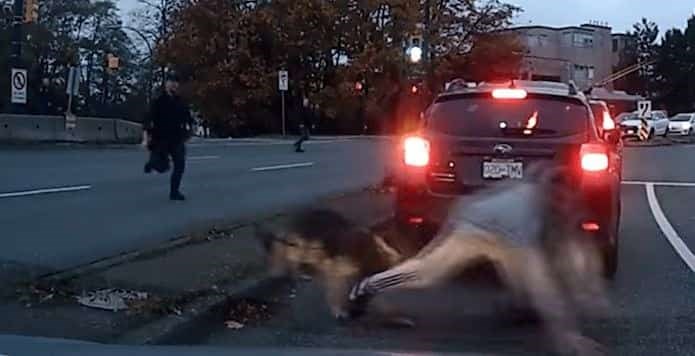 A video has appeared on YouTube that shows a dramatic chase between Vancouver Police officers, their canine unit, and a fleeing suspect.

Posted to YouTube on Monday, November 5, the video shows dashcam footage from a vehicle stopped at the intersection on Southwest Marine Drive and Granville Street.

The video captures an incident that took place on October 30 at approximately 5:30 PM, while officers were attempting to arrest three suspects in connection with a pair of burglaries.

From the dashcam's perspective, the police chase the suspect across the street and he runs back out into traffic and is hit by a vehicle. Following this, he runs across the median toward another vehicle and is bitten by the canine unit. Afterwards, a number of officers jump onto the suspect.

With files from the Vancouver Courier.