Around 11 a.m., a West Vancouver police officer on patrol spotted the driver of a white 991-chassis Porsche 911 speed through the “notorious” bend in the Upper Levels Highway at Capilano Road. 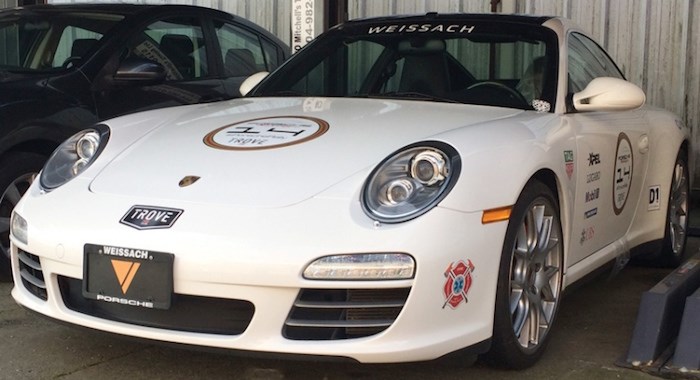 This Porsche 911 has been impounded for seven days after the driver was caught going 138 kilometres per hour on the Upper Levels Highway at Capilano Road. photo Mike Wakefield, North Shore News

“(He was) weaving in and out of traffic, attempting to pass other vehicles on the right side,” said Const. Kevin Goodmurphy, West Vancouver Police Department spokesman.

Radar clocked the driver at 138 kilometres per hour in a 90-km/h zone before the officer pulled the apparently lost autobahn enthusiast over.

Police impounded the vehicle for seven days and issued the 60-year-old driver a $368 violation ticket, which comes with three penalty points on his licence.

Making matters worse, the roads were very slick at the time, Goodmurphy said.

“Not only was this person driving very dangerously, according to the posted speed limit, but it was raining really heavily at the time and there was definitely standing water,” Goodmurphy said. “The conditions at the time were so poor, it increased the risk to the public dramatically.”

Now sitting in an impound lot, the Porsche is emblazoned with decals for the 2018 #PorscheRally, a charity event held Saturday for Porsche owners to tour up to Pemberton and Whistler. Participants were scheduled to leave Langley at 10 a.m. and arrive for a stop in Squamish at 11:45 a.m. The event’s beneficiary this year is the Village of Pemberton’s volunteer fire service.

The event’s website warns starkly: “THIS IS A DRIVING RALLY. SPEED LIMITS ON THE SEA TO SKY MUST BE FOLLOWED.”

West Vancouver police have issued 178 ticket for excessive speed so far this year, compared to 151 in the same time period last year.