Peyton Renner's cancer journey started with a sore knee while long jumping for her Port Coquitlam school.
May 26, 2021 2:10 PM By: Mario Bartel 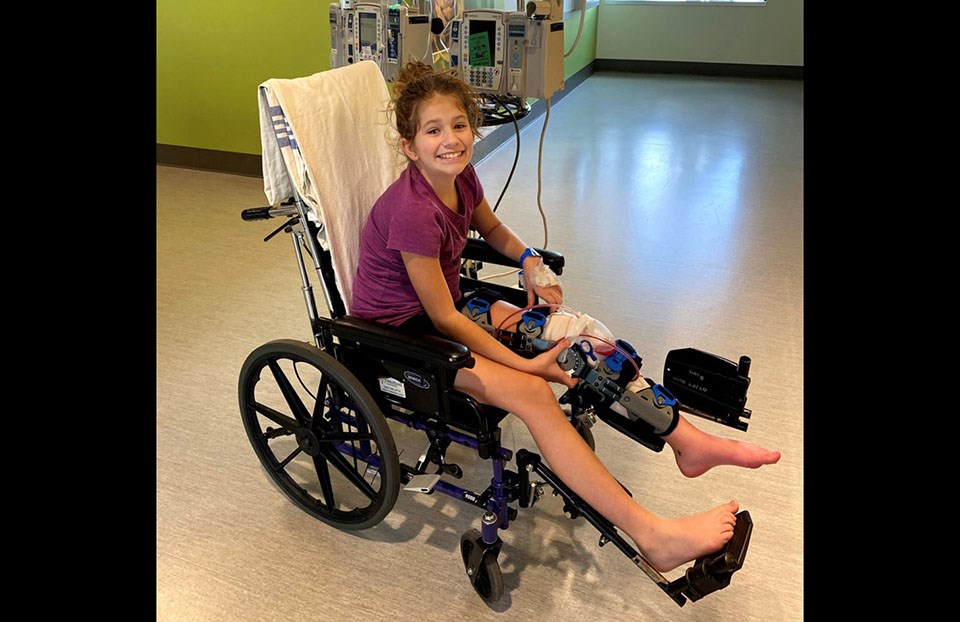 Peyton Renner of Port Coquitlam is all smiles after surgery at BC Children's Hospital last year to remove a vascular tumour in her left knee.Submitted

But when the Birchland elementary student tweaked her left knee two years ago and didn’t seem enthused about competing at the school district finals at Coquitlam’s Percy Perry Stadium, her dad sensed something was wrong.

Looking back, though, her mom Samantha now feels something was very right.

Almost overnight, Peyton’s knee swelled right up and she was very tired.

Concerned, her dad took her to the Ridge Meadows Hospital in Maple Ridge, where doctors suspected a cyst — a common occurrence in the joints of active youngsters.

Just to be sure, though, Peyton was referred to BC Children’s Hospital in Vancouver for a biopsy on her ailing knee; however, instead of a harmless cyst, she had a malignant vascular tumour.

Doctors were mystified, as her case is so rare: There are only six similar diagnoses in the world.

One physician even took the story of Peyton’s malady to a conference where fellow surgeons agreed surgery to remove the growth as well as her upper tibia bone was the best option for treatment.

Amidst the tumult of last year’s onset of the COVID-19 pandemic, life in the Peyton household was even further upended by appointments with doctors, surgeons and oncologists.

Mom Samantha said she was stunned into a state of suspended animation.

“It hit me so hard. I just didn’t know how to react,” she said, as the family’s world focused on trips to BC Children’s and getting her daughter better.

But even as those drives into Vancouver were fraught with worry and anxiety, they were also a balm, Samantha said, praising not only the medical care her daughter got but also the mental and emotional support provided to the whole family through a difficult and stressful time.

“They have so much going on, so much to help keep the kids occupied. It almost felt like a vacation,” she said.

Some of the fun hospital activities Peyton remembers most were colouring and a Halloween scavenger hunt, when she earned a $50 gift card to Toys R Us where she bought a bucket of slime. There were also visits from therapy animals like bunnies and dogs, as well as helpful volunteers who would just sit with her and talk or bring pages to colour.

“Everything was catered to her needs,” Samantha said.

Last October, doctors removed the tumour from Peyton’s left knee and a chunk of her upper tibia. They’ll also remove the growth plate on her right leg so her legs will grow evenly.

Months of intensive therapy have gotten Peyton back to light, low-impact physical activity, which has her excited about being able to participate in the RBC Race for the Kids, an annual fundraiser for the BC Children’s Hospital Foundation that wraps up with a big virtual celebration on June 6.

Through May, more than 2,500 registrants have been getting active on their own or with their families; some have been running, others have staged dance parties while others have had the opportunity to work out online with Olympic athletes.

In the past 35 years, the event has raised more than $15 million.

Samantha Renner said having seen how some of that money has been spent — to give doctors and nurses the tools and resources they need to help kids get better — her family is only too happy to chip in and help as well, even as their journey continues.

Samantha said the experience of the past two years has changed the way she looks at things in life: She’s thankful for the good moments and even some of the bad ones, including the day Peyton initially hurt her knee, because that was the clarion call that something more serious was going on.

“I like to think that day at track and field was a blessing,” Samantha said. “It could have become something a lot worse.”

• To register for the Race for the Kids, or to make a donation, go to raceforthekidsbc.com.