Streamkeeper John Preissl stands north east of Trans Mountain’s terminal in Burnaby. Excavation at the site behind him may have led to a sediment spill downstream in Silver Creek.
0
Apr 15, 2018 10:52 AM By: Lauren Boothby 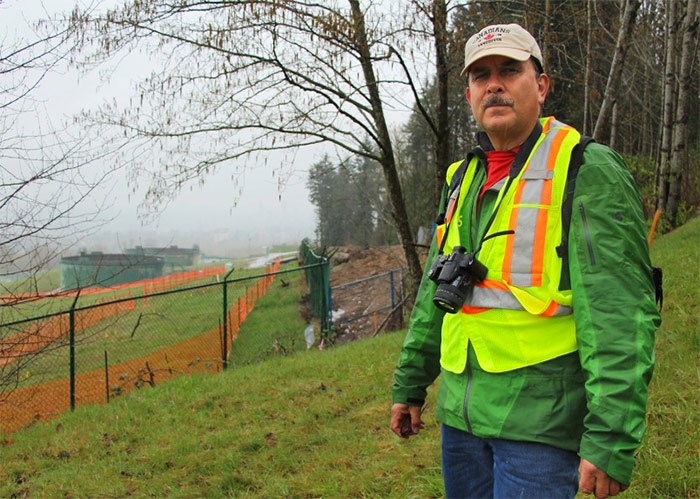 Streamkeeper John Preissl stands north east of Trans Mountain’s terminal in Burnaby. Excavation at the site behind him may have led to a sediment spill downstream in Silver Creek. Photograph By Lauren Boothby

The City of Burnaby is investigating a complaint about excavation at Trans Mountain’s terminal in Burnaby that may have led to a sediment spill at a Silver Creek tributary Friday, something a local streamkeeper worries could kill young salmon downstream.

Mud and sediment from work at the north end of the property fell into the tributary that runs from Burnaby mountain, through Kinder Morgan's property, and down into Silver Creek, according to Burnaby streamkeeper John Preissl. A worker was on site with an excavator attempting to remediate the area which saw increased water flow through the area due to heavy rain.

The City of Burnaby has looked into the complaint, according to email correspondence obtained by the NOW, and found the water downstream was cleared by 3 p.m.

"They should never be doing this in this weather. It's pouring rain, it's supposed to be raining all night," Preissl told the NOW. "They've had a little bit of a breach from so much water coming down the hill."

“They have failed their first test with a minor rainstorm, and they are not ready for any real rainstorm in the following months,” he said.

The streamkeeper told the NOW in January about the potential risks of rerouting Silver Creek and Eagle Creek tributaries on the mountain during the spring, calling it a “recipe for disaster.” In that interview, he said there would be runoff where crews were working which could affect the salmon downstream. Runoff can fill the water with silt, causing breathing problems for fish, and can smother their eggs.

And today he fears he may have witnessed just that.

"They've heavily sedimented the creek up, and that kills the fish downstream," he said. "If they continue to do this in the rainy period over for the next month and a half, we're going to have another issue.

"We have to keep an eye on it. I knew it was going to happen." 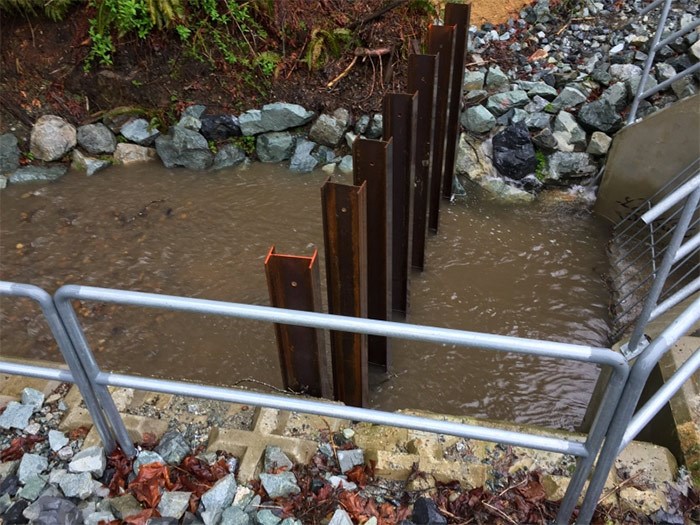 Kinder Morgan previously told the NOW it would abide by its water management plan, erosion and sediment control plans, which include installing silt fencing around stockpiled soils or disturbed areas.

But there did not appear to be silt fencing in that location on Friday. Preissl said the company needs to stop working in the rain, install silt fencing on the north end of the lot, and put down coconut matting to prevent future runoff from the site.

“I will demand that they do that, for sure,” he said.

The prospect of salmon being killed is disturbing to him as an Indigenous man, and someone who has been looking after this creek for almost 20 years.

"Salmon for me, it's in my DNA," he said. "I spent the better part of two decades looking after this creek, and to have Trans Mountain do this work, and do this right now and want to bury the creek that I looked after, it really pisses me off."

Preissl said he contacted Fisheries and Oceans Canada, the provincial government and the City of Burnaby. None were available for comment by press deadline.

The NOW has reached out to Kinder Morgan for comment.