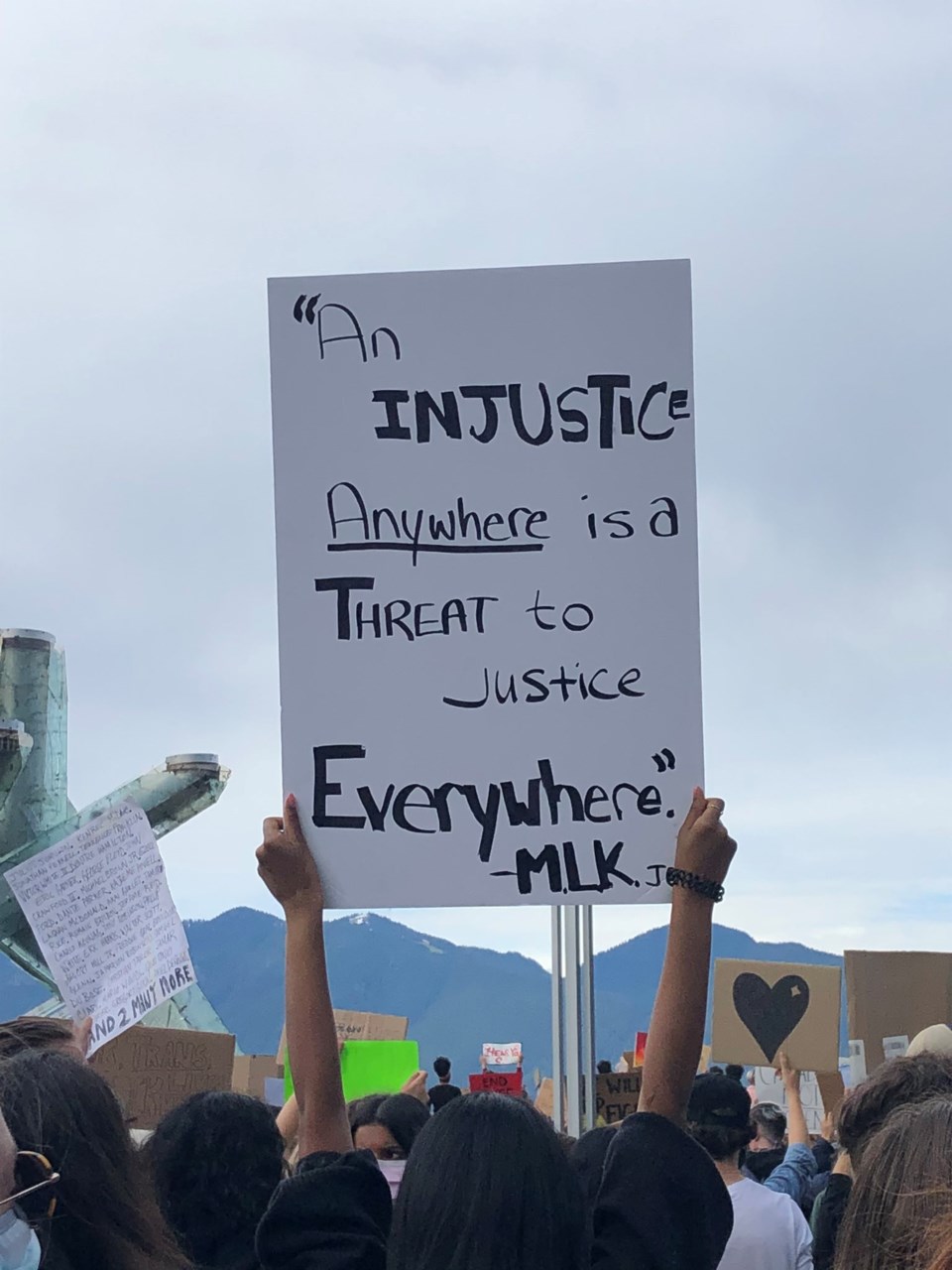 Thousands gathered in Jack Poole Plaza yesterday to protest against racism and stand in solidarity with the demonstrations that have been taking place across the globe in recent weeks. Photo by Elana Shepert

Thousands filled Vancouver's Jack Poole Plaza yesterday, spilling out onto surrounding streets for a protest speaking out against racism and violence, standing in solidarity with the Black Lives Matter movement.

Speakers - including a nine-year-old boy - took to the stage to share their experiences with racism, while protestors mourned the deaths of George Floyd and Breonna Taylor and demanded justice for the police officers who killed them.

Vancouver Mayor Kennedy Stewart released a statement on Twitter Friday commending the demonstration's organizers for "shining a powerful spotlight on the injustices and racism that occur every day in our city and around the world."

He wrote, "This is important work, and I want you all to know I am listening."

Aside from two "instigators" who Vancouver police arrested for assault during the anti-racism protest Friday, reported CTV, the thousands of Vancouverites who attended the demonstration ensured it remained a peaceful event.

Most demonstrators wore masks and carried signs, displaying messages like, "Black lives matter," and "No justice, no peace."

Here are a few more of the moving handwritten, handpainted messages from yesterday's protest:

A few shots from yesterday in Vancouver. The youngest speaker was only 9 years old and he started out his speech with “when I was 8 years old...” going on to tell us his personal experience with racism. No child should have to feel less than and different because of the color of their skin — especially in the classroom. It was important to hear from these young people. We think, ‘oh when the old racist people die out our world will be truly free and inclusive’ — that’s not true. We have to actively stand up and shut down racism. We have to teach our kids kindness and ensure they are playing and learning from a diverse set of people. If we do not... they’re learning racism and have unintentional implicit/unconscious bias. This is normal if we dont actively push against it and are aware of it. Parents: it’s important to teach your children what most schools aren’t teaching. It’s important to appeal to ministers of education/dept of education and push for what’s taught to be factually accurate AND inclusive. We shouldn’t be teaching our version of the truth. We should just be teaching the facts. We should own our history and learn from it. This last week has only chipped into the issues when it comes to race. We have yet to talk about how black pregnant women die at astonishing rates compared to white. We have yet to talk about why COVID is really impacting communities of color at such a disproportionate rate. We have yet to talk about the makeup of our prisons and how people move through the justice system if they make it alive to a courtroom. There is SO MUCH MORE. I’m emboldened by seeing so many of you, whom I really thought would stay silent, speak up. I want to see that followed by action. Action at the polls. Action at home. Action in social situations. I don’t come here to preach, I’m very ignorant — we all are. It isn’t a possibility to be informed on all issues. On all policies. On all things. But when you don’t know, ask that immigration lawyer friend, that social studies teacher friend, that GOOGLE, we can be a more engaged and enlightened society. This is the spark that lit the match. Let’s light the system on fire. . #blacklivesmatter

Is He Next? 💔✊🏿 #blacklivesmatter #blm

@boy_pollo @blackvancouver are leading the peaceful protest at the Olympic cauldron today! There’s more people than ever!! #letschangetheeorld #strongertogether #blmvancouver

Trying something new and out of my comfort zone. - It’s a blessing and a curse to be able to live through times like these. Regardless, I’m beyond thankful to have captured history in the making, and a future with hope. - This collection was created with the intention of telling a powerful story; I will let them do the talking. - #blacklivesmatter

“We Are Either Being Racist Or Antiracist, There Is No Middle Ground.” . #BLM#BlackLivesMatter#StandUp#NoJusticeNoPeace#CheckYourPrivilege#FuckRacism#SilenceIsBetrayal#EnoughIsEnough#WeBleedTheSame#SayTheirNames

Peaceful protest and support for #BlackLivesMatter in Vancouver. If you are neutral about systemic injustice and violence you have turned your back on the oppressed. *To white folk: be mindful of how you take up space. There were countless people who pushed past others, waving in and out of the crowd in their attempt to get closer and closer to the front. You do not arrive as an ally. You PARTICIPATE as an ally and you actively PRACTICE being an ally. Protests are a time for you to be present, be humbled, step back and listen. Learn moving forward.

#blacklivesmattervancouver was beautiful, the turnout was amazing. 8000 people came together to show support & demand change. hearing all the speakers & the raw emotions in their voices really impelled me to keep pushing forward for justice, not only within the Black community but for the Indigenous communities as well. being with all those people fighting together for something so important makes me proud to be a part of history & this revolution. the energy was truly uplifting & is something i’ll always remember. #blacklivesmatter #blmvancouver #blm

I am still processing the power and beauty of what I got to witness today. I am going to use this energy and hope and love to push me forward and lead my choices. To the part of me that was hurting, it felt like a huge hug, and to the part of me that has been quiet for too long, it was a kick in the ass to get moving. To hear hundreds (thousands!!!) of people shout together that they disagree with the systems that have been in place for far too long, and demand change and justice was a feeling I will remember for the rest of my life. After so much time feeling scared and confused and angry and heartbroken, I feel more hopeful having heard the voices of so many incredible BIPOC, and being surrounded by so much love and determination. This is huge, and this is only the beginning ✊🏼✊🏽✊🏾✊🏿 #blacklivesmatter #blm #nojusticenopeace

I’ve posted a lot on my stories, donated, signed petitions, sent emails to officials, listened to podcasts, read articles, stood among thousands and protested..& you know what? I’m not done. Every. Single. Day. This will continue. This message to government officials WORLDWIDE that racism, white supremacy, police brutality, and just plain dumbfuckery needs to be acted on to better this city, state, province, nation, and overall this world. It is time for CHANGE. We need to wake up and think, how do we want to leave this world when we’re through? Things need to get better. People need to BE better. Where is the love? 1 John 4:20-21 “If anyone boasts “I love God,” and goes right on hating his brother or sister, thinking nothing of it, he is a liar. If he won’t love the person he can see, how can he love the God he can’t see? The command from Christ is blunt: Loving God includes loving people. You’ve got to love both.” #breonnataylor #georgefloyd #blm #blacklivesmatter #blmvancouver

There is an overwhelming number of people who don't fucking get it. Prejudice against people of colour happens every day everywhere, even here! People are losing their homes, family, and lives over the colour of their skin, which should not be happening in 2020. For just a second imagine, what it is like to genuinely fear for your life and feel unloved by the world you live in. You can't? That's because you are privileged! It's pathetic, and it boils my blood to see some of you more concerned with damage of property than with the lives of the people you call "friend," "boyfriend," or "idol." Realize once and for all that systemic racism is deeply seeded into your brains, and it needs to end. Don't only care when it affects your particular race or culture but also support all who are wronged. #blacklivesmatter

Thank you to @blackvancouver and all the speakers that were vulnerable enough to share their experiences and wisdom with us at the peaceful protest today. I am committing to learning to be a better ally, educating myself further on the history of BIPOC in America and how I have benefited from this system of white supremacy. I am committing to drawing attention to and disrupting the white privilege within myself and those around me. It is so important that we address all levels of racism (systemic, institutional, interpersonal, internalized) that are still alive and well in the world today. Now is the time to amplify black voices, to stop making our reactions and white fragility the center of the discussion. Time to stop putting the burden on BIPOC to educate us and make use of all the resources being shared. I’ll list some of the ones I’ve noted below. Documentaries/Shows: • 13th • Who Killed Malcolm X? • Time: The Kalief Browder Story • Dear White People (All on netflix) Podcasts: • 1619 • Finding Cleo (Canadian) • Thunder Bay (Canadian) Anti-racism books: • How To Be An Anti-Racist by Ibram X. Kendi • White Fragility by Robin DiAngelo • Me and White Supremacy by Layla Saad Accounts to follow: @ihartericka @rachel.cargle @decolonizingtherapy @dr.thema @nowhitesaviors @alyssamariewellness