A woman who was celebrating her 83rd birthday by doing North Vancouver’s Grouse Grind Friday morning got an unexpected bonus when Canada’s prime minister stopped to take a photo with her as he hiked up the trail.
0
Sep 4, 2019 11:17 AM By: Jane Seyd

A woman who was celebrating her 83rd birthday by doing North Vancouver’s Grouse Grind Friday morning got an unexpected bonus when Canada’s prime minister stopped to take a photo with her as he hiked up the trail.

Robert Horne, who grew up in Lynn Valley, said his mom, Mary Horne, was stopping for a rest on the trail when Prime Minister Justin Trudeau came briskly hiking up behind them. 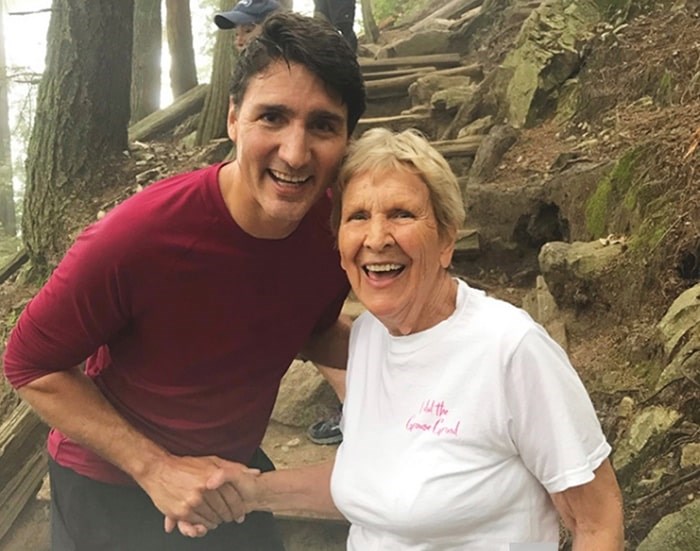 Horne said despite Trudeau’s goal of trying to make good time on the Grind, he agreed to stop for a photo with the birthday girl, who was thrilled at the chance encounter.

“Her comment was, ‘He’s got to be the best looking prime minister,’” said Horne

The Hornes weren’t the only ones who bumped into Canada’s pre-eminent politician on Grouse Friday, as selfies with Trudeau soon began appearing on social media.

“You go for a hike and see your Prime Minister. You know, just another Friday,” wrote one woman who posted a photo of Trudeau on social media.

One university rower also posted a selfie with Trudeau, commenting: “Finished off a week of training camp by doing the Grouse Grind with the team and our one and only prime minister."

Trudeau was accompanied up the Grind on Friday by a security detail, and a number of local Liberal candidates, including MPs Jonathan Wilkinson and Terry Beech, and West Vancouver Liberal candidate Patrick Weiler.

There was no word on exactly what was happening up top of Grouse, which was being described as a private event – rumours included the possibility that footage for an election advertisement was being shot.

A spokesman for the Liberal Party responded to questions about Trudeau's surprise appearance on the North Shore with the statement, "The Grouse Grind is one of his favourite hikes, and he was joined by a few candidates and supporters for the visit before returning to Ottawa."

The PM’s “Grind time,” was 52:55, according to Liberal communications director Braeden Caley  – beating the time Trudeau took to complete the hike dubbed “Nature’s Stairmaster” during the last election by a couple of minutes.

Trudeau’s Grind hike Friday came at the end of a busy few days in B.C., where he met with B.C. Premier John Horgan and Vancouver Mayor Kennedy Stewart, as well as popping up in unofficial venues like a Richmond mall and a White Spot restaurant.