Vancouver city council approved Tuesday a 4.5 per cent property tax hike to help pay for next year’s $1.5-billion operating budget and $371 million in new spending for construction projects that includes a major upgrade to the Granville Bridge.
0
Dec 19, 2018 7:12 AM By: Mike Howell

Vancouver city council approved Tuesday a 4.5 per cent property tax hike to help pay for next year’s $1.5-billion operating budget and $371 million in new spending for construction projects that includes a major upgrade to the Granville Bridge.

The tax increase was reduced from the original 4.9 per cent proposed by city staff, who had yet to calculate late Tuesday how that would translate to what the owner of a single-family home would pay. 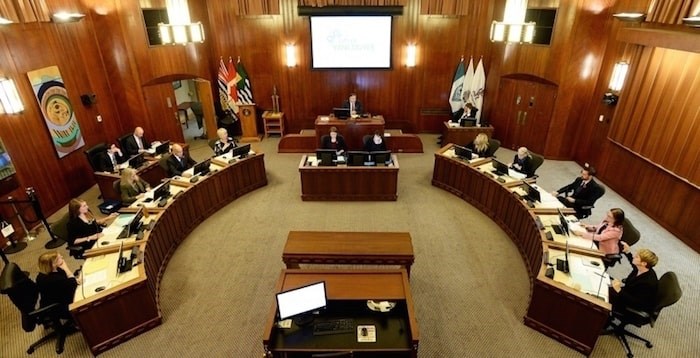 Under the 4.9 per cent calculation, the increase showed an owner of a median single-family home assessed at $1.8 million would have paid $108 more than this year’s bill.

Council was able to reduce the recommended tax increase of 4.9 per cent after introducing a series of motions and amendments to re-allocate money from various initiatives, contingency budgets and cut up to $1 million from the city’s innovation fund.

The fund was used in previous years to provide money to start the rent bank, a social enterprise program in the Downtown Eastside and pay for projects related to Truth and Reconciliation.

Of the 4.9 per cent proposed hike, 2.2 per cent was related to inflation and collective agreement increases for employees, 1.7 per cent was to cover the new provincial government-driven employer health tax and one per cent was for infrastructure upgrades. It wasn't clear late Tuesday how those percentages now break down under a 4.5 per cent tax increase.

Water, sewer and solid waste fees are also going up by 8.7 per cent.

Council’s approval of the budgets came after managers of the city’s finance and engineering departments warned delaying a vote would disrupt hiring hundreds of new staff and roll back construction schedules.

The budgets were approved despite an attempt by NPA Coun. Sarah Kirby-Yung to defer a vote until early in the new year. Kirby-Yung said her intent was to have more time to crunch the numbers and seek to reduce the proposed 4.9 per cent tax increase by one per cent.

She pointed out the city’s own survey found only 15 per cent of residents and seven per cent of business owners were prepared to pay a four per cent property tax increase.

“We didn’t even ask them up to 4.9 per cent,” said Kirby-Yung, noting residents identified increased cost of living expenses as one of their top three concerns.

Her motion was defeated, despite support from NPA councillors Colleen Hardwick, Lisa Dominato and Rebecca Bligh. Coun. Melissa De Genova was the lone NPA councillor to vote against Kirby-Yung’s request to defer the budget.

“I’m not sure that an extra week or two is going to provide us with the consultation that we need,” De Genova said. “I want to get started on the next budget [for 2020] right now. I want to see what we can do for affordability.”

De Genova’s concern about affordability was behind her move to successfully get council’s support to re-allocate $5.3 million budgeted for the construction of a new permanent plaza at Robson Square to non-market and supportive housing.

“We could consider making the plaza we already have fancy and dressing it up, or we could consider providing homes for people,” she said. “Right now, I see $5.3 million on the table that could be spent on housing.”

Kirby-Yung was successful in moving a separate motion to have city staff explore shifting the tax load of businesses to residents by up to two per cent—a policy that was in place for a few years under the previous Vision Vancouver administration.

Throughout the afternoon and into the evening, council passed a series of other amendments, including one from Green Party Coun. Adriane Carr aimed at retro-fitting buildings to reduce greenhouse gas emissions.

COPE Coun. Jean Swanson got support to request money from the empty homes tax be used to build homes for people whose incomes are less than $15,000 per year.

At council’s direction, staff will also conduct a review of the Vancouver Economic Commission and how the city’s investment supports the new council’s priorities, which are focused on affordable housing.

The approval of the operating budget means almost $3 million will be spent on hiring of more police officers and firefighters. The city will spend $3.1 million to hire more staff in the permits and licensing department to speed up the time it takes to obtain a development permit.

At least $3 million from the operating budget will be directed at affordable housing. From the capital budget, $15 million will be used to acquire land for affordable housing, $8 million for social housing and $2 million to upgrade single-room occupancy units.

The capital budget also has $29 million budgeted for sewer main replacement, $20 million for upgrades to the Granville Bridge, $9 million for bikeways and greenways and $10 million for the acquisition of park land.

At least $2.1 million will be spent on improving street and parks cleaning services, including the addition of more recycling bins.