Ongoing mass protests in Hong Kong were mirrored in Vancouver as two opposing camps faced each other outside the Broadway-City Hall transit station on Saturday afternoon.
0
Aug 17, 2019 7:38 PM By: The Canadian Press

Ongoing mass protests in Hong Kong were mirrored in Vancouver as two opposing camps faced each other outside the Broadway-City Hall transit station on Saturday afternoon. 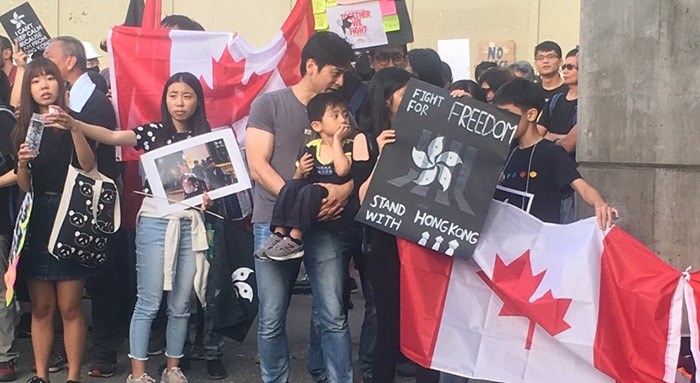 The groups traded chants such as "One China," from the side bearing Chinese flags, and "two systems," from the group rallying in solidarity with pro-democracy protesters in Hong Kong. 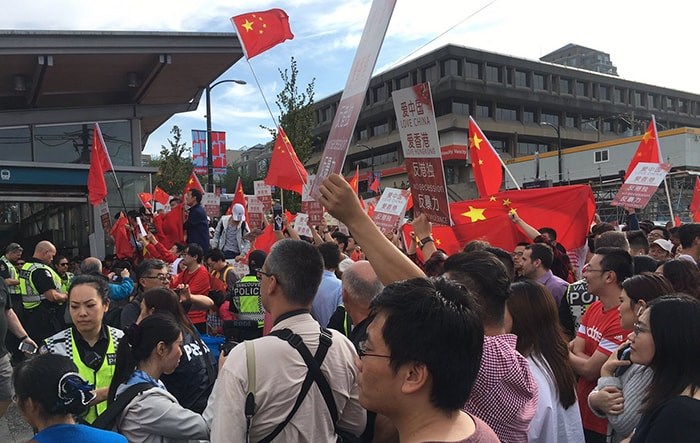 Some of the pro-democracy protesters wore goggles and eye patches stained with fake blood, a reference to a young woman who may be blind after allegedly being struck by a bean bag round fired by Hong Kong police last weekend.

Organizers on the pro-democracy side faced off against those on the side of the Hong Kong police, disagreeing over who was to blame for escalating violence in the semi-autonomous region.

Hong Kong has been in uproar since early June, when as many as a million people first took to the streets in protest of a proposed extradition bill that would have allowed certain suspects to be extradited to mainland China — a move the protesters say jeopardizes Hong Kong's autonomy.

The bill has since been suspended, but the protesters want it off the legislative table altogether, in addition to calling for the resignation of Hong Kong's Chief Executive Carrie Lam, democractic elections and an independent investigation into the use of force by police.