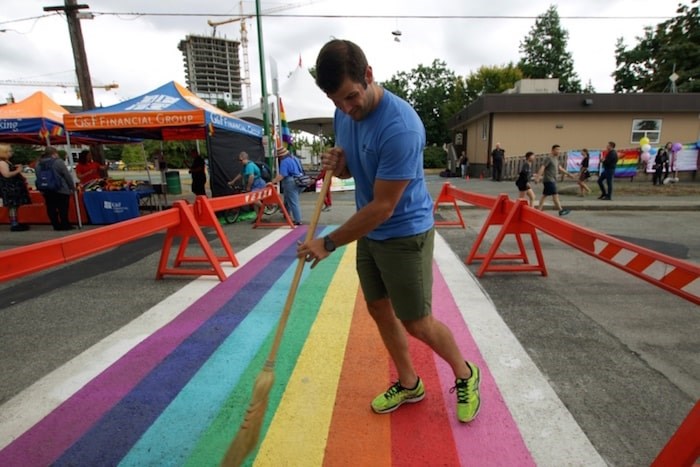 The City of Burnaby painted this crosswalk on Jubilee Avenue ahead of the city’s first Pride Street Party in 2018. The City has said they plan to take steps to be more queer inclusive. Photo by Rob Kruyt

The City of Burnaby is taking steps to become more queer inclusive.

The executive committee of council unanimously approved a motion Wednesday for staff to update the city’s equity policy “to reflect the full, contemporary diversity of Burnaby, including LGBTQIA2S+ community members.”

The motion also directed staff to form a cross-departmental working group, with representation from senior management, “to prioritize and advance LGBTQIA2S+ inclusion in all facets of city spaces, services, materials and programs.”

A number of committee members, including Coun. Pietro Calendino, were unclear about what the letters LGBTQIAS2+ stood for.

“I just need an explanation because this terminology keeps changing,” he said. “IA2S has been added; what do they stand for?”

“Some days I have to Google it,” Hurley said. “In any case, it’s all part of human rights legislation; it’s really a no-brainer for us.”

LGBTQIA2S+ is an acronym for lesbian, gay, bisexual, transgender, queer and/or questioning, intersex, asexual, two-spirit. The + symbol stands for other ways people self-identify.

No date was specified for the policy update or the formation of the working group.