Shoppers at a Coquitlam department store were aghast and appalled when racial slurs and expletives were blasted over the store’s intercom recently.
0
May 28, 2019 7:34 AM By: Diane Strandberg

Shoppers at a Coquitlam department store were aghast and appalled when racial slurs and expletives were blasted over the store’s intercom recently.

And now the store’s administration is condemning the incident. 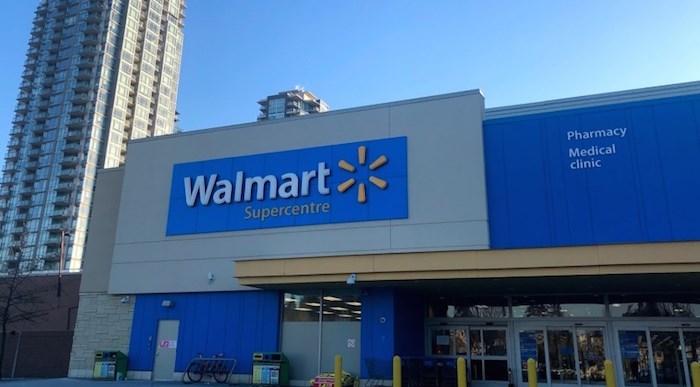 Someone made racist comments over the public address system in the Walmart at Coquitlam Centre on Tuesday evening, leaving customers upset. Photo by Kyle Lee

Still, the comments have left a bad feeling with a Burnaby school district worker who was shopping in the store at the time when the racist comments were made.

Sheena Webber was shopping at Walmart at Coquitlam Centre May 21 at around 5:30 p.m. with her grandchildren, aged 11 and 7, and daughter when a voice over the loudspeaker began making racial slurs and ordering black people to leave the store.

“The N word was used and the F word was used,” said Webber, who had to leave the store before any apology was made by the store’s management.

Webber said she doesn’t know if management addressed the situation, but one of the Walmart workers said it “was just somebody trying to be funny.”

Webber disagrees and thinks someone at the store should have followed up with a public apology immediately after the incident over the PA system.

“Nobody thinks that it is funny and it’s totally not acceptable.”

Webber’s daughter was also shopping in the store and as soon as they cashed out at the self serve line, the family left.

But Webber couldn’t get the incident out of her mind.

“It was horrible,” she said.

Later, she found herself trying to explain the nasty comments to her grandson who wondered why such terrible words were used.

“There’s a lot of people that were in that store. I still shake my head to this day, how can this be?”

Walmart has provided The Tri-City News with a statement, noting that an investigation took place immediately after the incident and a police report has been made.

“We can confirm two individuals not affiliated with the store used our paging system to make inappropriate comments. Their comments and behaviour do not represent Walmart’s values and have no place in our stores.

“As soon as the incident occurred, we launched an immediate investigation, took steps to prevent further occurrences and contacted the local police. We apologize to any customers affected by this incident.

“Respect is a core value at Walmart Canada and we do not tolerate any behaviour which contradicts this value. Walmart Canada is proud to reflect the diverse communities we serve through our diverse customers and associates,” spokesperson Felica Fefer confirmed in the statement.

Webber said she appreciates the effort Walmart is making but wishes an apology had been done sooner over the PA system to prevent customers from having to leave the store with such a bad feeling.