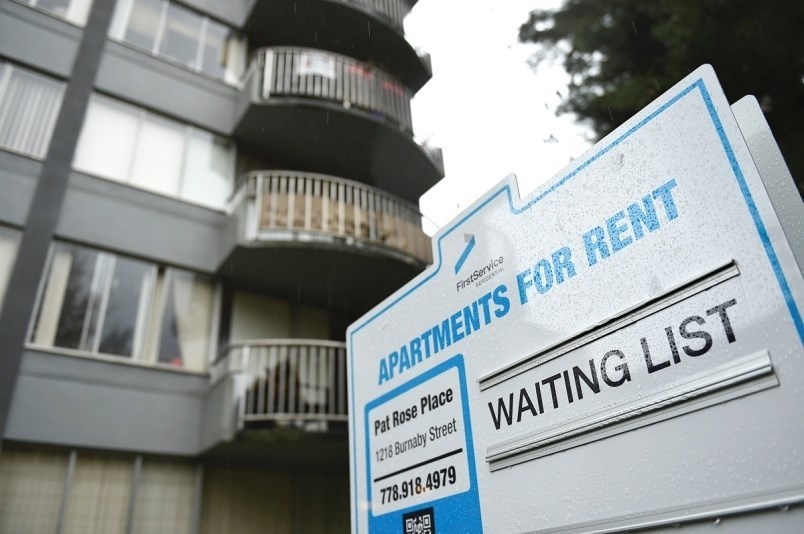 Canada Mortgage and Housing Corporation released its annual rental market report Thursday and said, in general, newer structures and those in central areas saw larger increases in vacancy rates, particularly for highrises with 200 or more homes.

Meanwhile, vacancy rates decreased in suburban markets with lower rents, a trend that also extended to tighter rental market conditions in cities such as Abbotsford and Mission, the report said.

“These regional differences in the vacancy rate are consistent with the findings in other large Canadian centres such as Toronto and Montreal, where demand has shifted away from downtown cores to more outlying areas and neighbouring cities,” the report said.

Vacancy rate by bedroom type and corresponding rental rate were as follows:

Despite the increase in the vacancy rate, the report notes the challenges that still face renters, noting only 0.2 per cent of rental stock in the region would be affordable to households earning $25,000 or less per year.

Households earning $47,000 or less per year could afford 23.9 per cent of what’s available on the market, said the report, noting only 12 per cent have bedrooms, highlighting further challenges for families in those income ranges.

“While the overall rental market loosened somewhat in 2020, these results reinforce that significant imbalances and pressures remain, particularly for lower income renter households,” the report said.

"Affordable" is considered a person or household spending no more than 30 per cent of their income on housing.

In Vancouver, the report said the pandemic has had an influence on decreased demand for rental homes. The drop in demand is attributed to job loss among younger people and workers in service industries, both of whom disproportionally rent.

“While seasonally-adjusted employment among the 15-24 age group had partially recovered over the summer, it began to decline again in the fall. Facing unemployment or disrupted incomes, affected tenants may have chosen to combine households or relocate to lower priced accommodation, lowering rental demand in central areas with high rents.”

With international borders closed, migration to the Metro Vancouver region has slowed significantly. The report pointed out newcomers, many of whom tend to rent, are responsible for the majority of population growth in the region.

“This impact may, however, be temporary given that the federal government has announced higher immigration targets for the coming years,” the report said.

With post-secondary education moving online, many students, and especially international students, have relocated away from universities or left Vancouver entirely.

“The supply of units in this area did not increase during this period, suggesting that this change results purely from a reduction in demand,” the report said.

Other findings of the report:

• The average asking rent for vacant units was 21.4 per cent higher than the overall average rent for occupied units in the Metro Vancouver region.

• The “universe of rental apartments” increased by a net 2,388 units in 2020, the highest annual increase among available records since 1990. The increase is a result of the elevated number of new rental units started over the past few years now coming to market.

“However, with rental starts over the first three quarters of 2020 moving 23% lower year-over-year, there is a risk that the current uncertainty around rental demand leads to a gap in rental completions in the coming years.”

• Same-sample average rents for apartment units in the region’s primary rental market increased two per cent overall, down from 4.7 per cent in 2019. Some high rent areas in Vancouver saw rents move lower, namely in English Bay (minus 2.4 per cent) and Kitsilano and Point Grey (minus 1.3 per cent).

“Average rents nonetheless increased by more than the provincially-allowable increase, which suggests that landlords, through turnover of long-term tenants, are able to increase rents to market levels that are higher.”