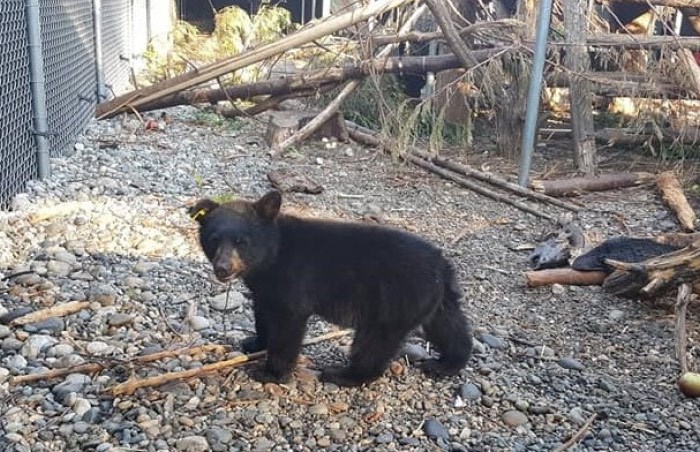 Sadly, the cub was taken to the Langley centre, by Wildlife Rescue Squamish, after she was left orphaned when her mother was electrocuted while climbing a power pole on Whistler Mountain last Friday (Aug. 31).

Thanks to the centre – which is the only facility in BC specializing in the care of mammals and one of only four bear rehabilitation facilities in the province – she now has a new temporary home and twin cubs, Seymour and River, to keep her company.

CCWS assistant executive director Winona Reinsma told the Courier on Saturday that Cedar was settling into her new life, after the traumatic experience of losing her mom.

“She was so stressed being on her own that after three days in isolation it was decided that the best thing to do would be to move her in with River and Seymour as soon as possible.”

She said Cedar and her big brother Seymour hit it off right away.

“River is a little less impressed but she's slowly making friends with her new sister.”

Reinsma said Cedar was healthy and had adapted to living with the other cubs. She said the cub was looking great for rehabilitation.

Sergeant Simon Gravel, from the Conservation Officer Service, said he didn't want to speculate about why the bear climbed the power pole near Franz's Chair.

The tower — the only of its kind on the mountain — is currently unused and scheduled to be removed, said Whistler Blackcomb's senior manager of communications Marc Riddell.

"We take wildlife very seriously. It's a huge component of everything that we do and how we manage our tenure," Riddell said.

"In the meantime, we're going to probably have to put some wildlife fencing around it just to ensure it doesn't happen again."

It's been another busy summer for the COS, which received 44 calls in August about bears in Whistler, down from the 55 received in July (along with 27 in June and 24 in May).

Two bears were killed due to human conflict this summer.