Residents fear Burnaby forest will be cut down for rental housing

Residents are concerned about a townhouse development planned for southeast Burnaby
Aug 19, 2020 9:04 AM By: Dustin Godfrey 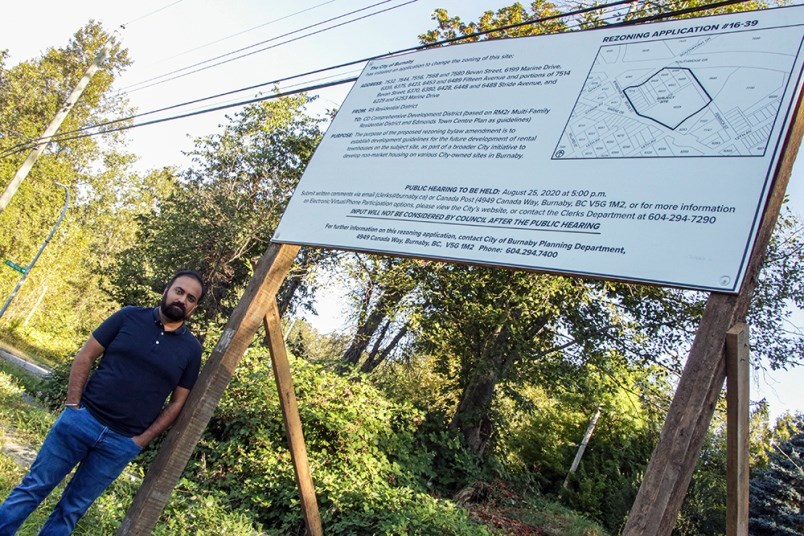 Karman Dhatt and his neighbours are pushing back against a proposed townhouse development, proposed for an area that is half developed as single-family houses and half undeveloped forested area. Photo by Dustin Godfrey/Burnaby NOW

A group of residents is concerned a townhouse development planned for southeast Burnaby will strip away some of the area’s natural forested space.

The townhouse project is slated for 10.5 acres of mostly city-owned land around Bevan Street, just southeast of Byrne Creek Park. The land is divided between existing single-family homes and a thick forested area between Marine Drive and Southridge Drive near Edmonds.

The project is expected to add 108 two- and three-bedroom rental apartments, largely affordable for households making between $56,000 and $120,000, and another 108 units rented out at market rates, according to a city staff report.

The project would be developed and operated by Mosaic Homes, which also owns a slice of the land proposed for development.

The city originally suggested an affordable home ownership program for the housing, but ultimately landed on adding to the rental stock.

Nearby residents are planning on submitting a petition calling on city council to cancel the project.

“We found out about this last week, actually, and we’re kind of surprised by that,” said nearby resident Karman Dhatt, who said he only heard about the proposal after seeing a sign erected next to the property.

He noted the timing with the COVID-19 pandemic and the inherent struggle in getting neighbours together to talk about the issue.

Looking at the city’s map, Dhatt said the lot appears to be split fairly evenly, with the already developed land taking up the western half.

“I think most of us are not as concerned about that as we are about the … dense forest that’s in there,” Dhatt said.

The forested area is a “sore subject” for local residents, Dhatt said, as the neighbourhood slowly loses wooded lots to developments. Just across Stride Avenue, another property is set for 108 low-rise non-market apartments, which will include 20% “deep subsidy” units, 50% of units geared to income and 30% market rentals.

“A lot of us are concerned about … the wildlife and birds and things that are part of that forested area,” Dhatt said. “We’re also concerned about, obviously, local traffic and noise pollution getting worse.”

Dhatt acknowledged the latter concerns are a tougher sell for the residents, with Burnaby – and Metro Vancouver in general – requiring developments to accommodate population influxes.

Dhatt said he can’t speak for those living directly across from the lot, who would feel the brunt of the disruption, but said he’s mostly concerned about the potential environmental effects of the development.

The city owns plenty of lots in Burnaby, Dhatt noted, and he hopes it will do some more digging to find another lot that doesn’t require razing a forested area.

In a statement, city spokesperson Chris Bryan said the lot was chosen because it was already zoned for residential development, "which means that it has been slated for development into residential homes for some time."

"The Bevan lands site was selected based on its suitability for accommodating a significant number of non-market units, which is also supported by the site’s long standing designation," Bryan said.

He also noted the city's recently adopted climate action framework includes significant work on expanding the city's urban canopy of trees, and the city's tree bylaw mandates that the city replace each tree removed with up to three new trees.

"A number of these replacement trees will be incorporated into the development concept for the site, while the rest will be planted as part of the city’s commitment to renewing and expanding our urban canopy. For example, last November, city crews planted approximately 500 boulevard trees along Southridge Drive," Bryan said.

The proposal is up for a zoning amendment to set development guidelines to be discussed at a public hearing next Tuesday.