Richmond Mounties had to be called to separate a brawl outside a city centre restaurant, where customers allegedly attacked the restaurant owner and his wife.
Jul 22, 2019 4:40 PM By: Richmond News 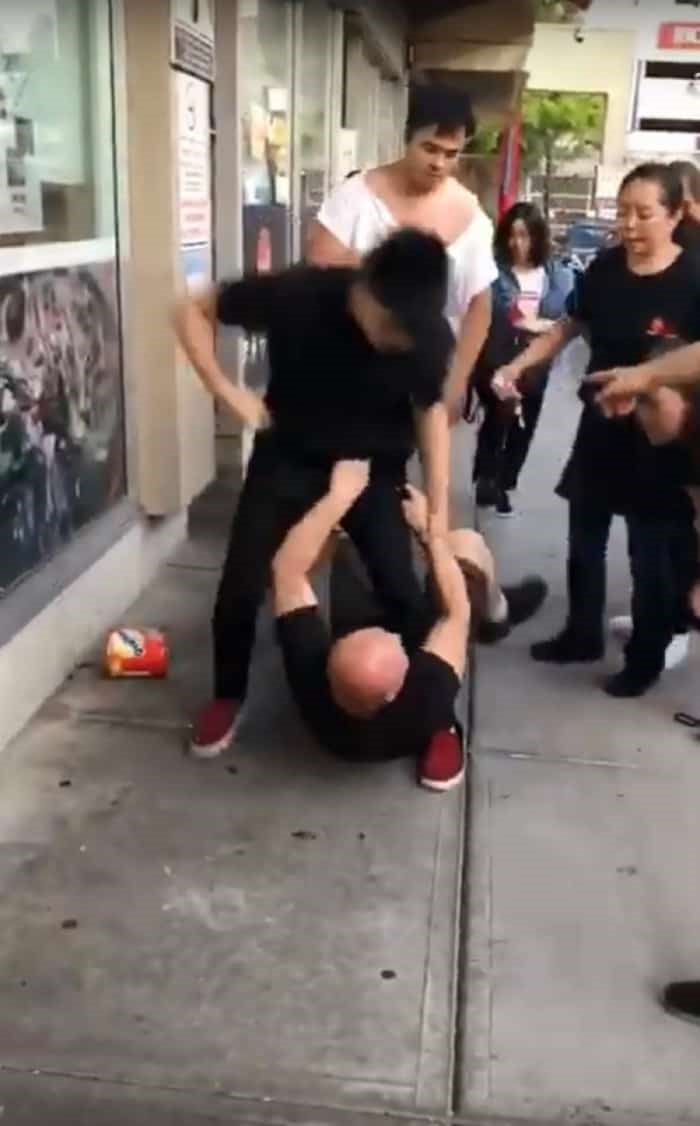 The restaurant owner was pushed on the ground, and the customer was trying to hit him in the head. / NONO SHEN / YouTube

Richmond Mounties had to be called to separate a brawl outside a city centre restaurant, where customers allegedly attacked the restaurant owner and his wife.

According to Chinese language social media site WeChat, the fight – which was caught on video – started after a family-of-five refused to pay the full bill at the Chuan Ku BBQ Restaurant at Westminster Highway and Cooney Road on Friday evening.

It’s understood the dispute began inside the restaurant over the customers’ claims that some of the food was raw and their subsequent offer to pay only $50 of a $147 bill.

The argument then spilled outside and, in the video, one of the customers can be seen apparently trying to punch restaurant owner Roger Wong on the head, while he was on the ground.

All the while, in the same 12-second clip, Wong’s wife was on the ground at the same time, with another customer appearing to be on top of her.

“I tried to stop them from walking out of the door and told them to wait for the police,” Wong told the Richmond News.

“They pushed me on the wall. My wife came out and wanted to stop the fight, but a family member kicked my wife’s belly.”

The family, added Wong, had earlier noticed raw meat inside a few chicken wings, but “besides that, other dishes were good.”

“We told them we were happy to give them new chicken wings, but they complained all the food wasn’t tasty, and they stood up without paying the bill.”

As they threw $50 on the table and tried to leave the restaurant, Wong contacted the police for help.

“Several employees of the restaurant and patrons were engaged in a physical altercation that allegedly stemmed from an accusation of improperly prepared food and the payment of said food,” said Hwang in an email to the News.

“The parties involved did not appear to be seriously injured and were assessed by emergency medical personnel. No arrests were made following the investigation of the incident.”

According to Wong, three of the customers in question were handcuffed and later released.

He told the News that he suffered from dizziness after the fight and has difficulties falling asleep at night due to the ache.