Why Richmond uses dogs to clear snow geese from fields

A poster called for owners of “well-trained, medium to large sized dogs” to help move snow geese away from school fields and parks during the winter months.
Mar 8, 2019 3:25 PM By: Megan Devlin

The City of Richmond is explaining its participation in a regional snow goose management strategy after several local birders were upset by posters asking dog owners to help clear the birds from city’s parks and fields.

Kate Paton, an amateur wildlife photographer, came across a poster at the Richmond Nature Park over the weekend calling for owners of “well-trained, medium to large sized dogs” to help move the geese away from school fields and parks during the winter months.

She didn’t approve of using dogs to “chase and scare” the geese away.

“The snow geese have more right to be here than anyone else,” she said of the birds that migrate from Siberia every year to spend the winter in warmer marshlands on B.C.’s South Coast and Washington State.

Hundreds of thousands of them come to Richmond every year, and some locals say they’re a nuisance because they make noise and leave excrement in the city’s green spaces.

Ted Townsend, spokesperson for the City of Richmond, said the arrival of snow geese in Richmond continues to be a welcomed ecological event, but that the large increase in their numbers over the past decade has raised some safety concerns.

He said they’re trying to move the geese because the birds present a hazard to air traffic when they congregate in huge numbers so close to Vancouver International Airport.

“The intent of the program is to keep the snow geese moving south, away from the airport where the birds pose a significant risk to aviation,” he said.

Ideally, they’ll move to south Richmond and Delta, where more than 3,000 acres of winter crops have been planted specifically for the geese to feed on. The city funds the planting program, which encourages farmers to plant winter cover crops where the geese can forage.

“This helps alleviate potential damage to other crops and playing fields that can be caused by over-foraging,” Townsend said.

Volunteers and their dogs, Townsend explained, are trained by a professional wildlife management consultant and must pass a strict screening test in order to participate.

But Paton is concerned the posters will encourage what she describes as already irresponsible dog owners who use Richmond’s nature spaces. 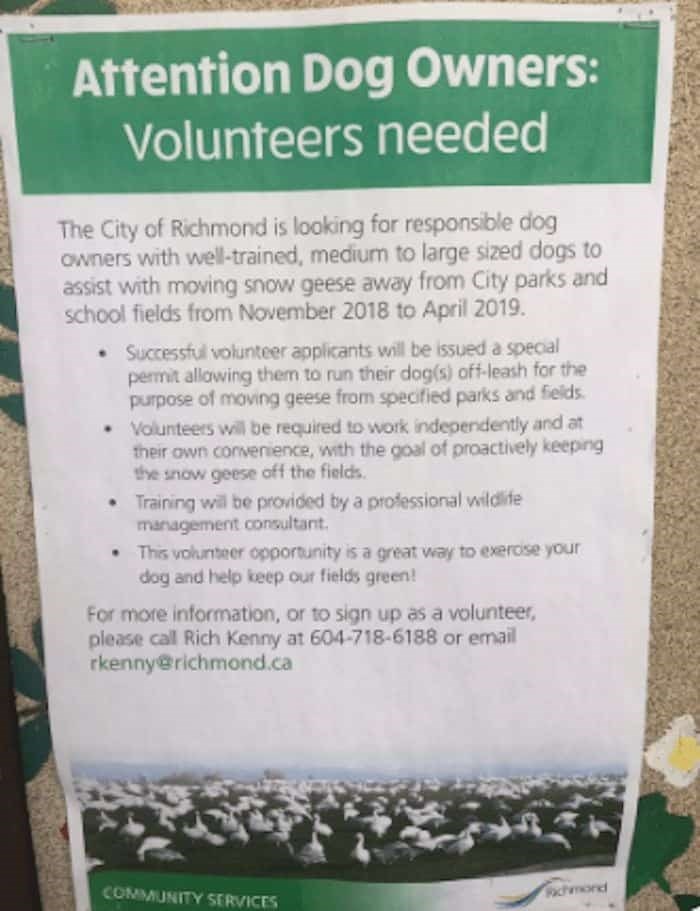 “I know a few dog owners that are just plain stupid and never leash or pick up after their dogs. They encourage their dogs to chase ducks and herons and all manner of wildlife,” she said.

“These are they type of people who will think they have free licence to let their dogs chase wildlife — because of this appeal.”

Townsend explained the volunteer dog program has been in place for a number of years, and that it’s an important part of the regional strategy for managing snow geese developed by the Lower Mainland Snow Goose Steering Committee.

The strategy was created with input from Canadian Wildlife Services, the provincial government and YVR.

The parks and fields targeted by the dog program this year include: