Desperate times called for desperate measures and, with their new Richmond hockey store struggling, the Jung brothers took matters into their own hands.
0
May 16, 2019 3:45 PM By: Alan Campbell 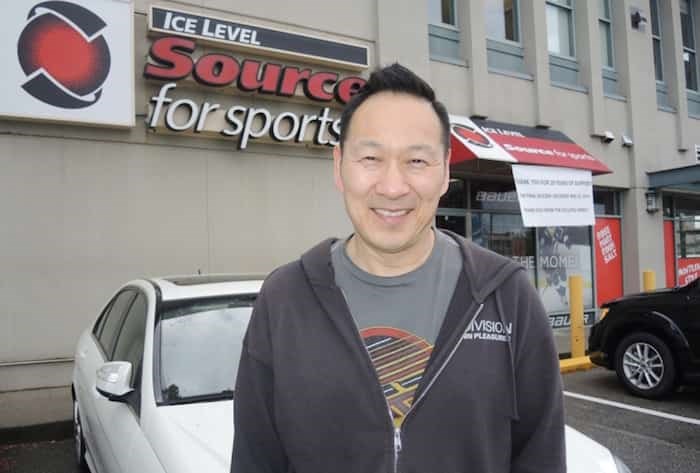 Ice Level Sports co-owner Russ Jung says he will be sad to let the 28-year-old business go, but happy to finally get a weekend off. Alan Campbell photo

Desperate times called for desperate measures and, with their new Richmond hockey store struggling, the Jung brothers took matters into their own hands.

Outside of Minoru Arena at 4 a.m., the siblings moved up and down the line of parents waiting to sign up their kids for Richmond Minor Hockey, handing out free coffee and donuts, along with a flyer for their new store, Ice Level Sports, on No. 3 Road, close to Alderbridge Way.

“Even though we were well-known, people weren’t coming to us right away,” said Russ Jung, 59, of the shrewd business move 28 years ago by himself and younger brothers Chris and Steve.

“Myself and Chris were working 10-hour shifts to sell one item. There was lots of competition at the time. But we picked up a year or two into it and we moved to a bigger store next door.”

Another younger brother, Mike, and their sister, Cathy, the eldest of the Jung “kids” joined the firm a couple of years in, with Ice Level remaining at its No. 3 Road locale for eight years, until 1999.

Its third and final location, at Ironwood on Steveston Highway, is where the doors will sadly close on Saturday, May 25.

“It’s come down to the fact that costs are killing us,” said Russ. whose interview with the Richmond News outside his store is punctuated with conversations with customers.

“Not being able to get workers is killing us…one kid called in sick one day because he was getting a tattoo; that’s what you’re up against.

“You just burn yourself out and keep banging your head against the wall…for no reward, other than working for yourself. We’re not even covering our costs.

“The lease went up 20 per cent this year alone, that’s why we’re shutting it down.”

“I guess we’ll relax for a bit, maybe take a weekend off. When you work retail, you never get a weekend off, right. We missed out in our kids playing in hockey tournaments.

“We will probably sit back when we close the doors and have a good cry. But it’s been a great run and there’s only so much time on this Earth to do what you want to do and that time has come.”