Cpl. Dennis Hwang of Richmond RCMP Richmond Mounties are vowing to catch the man who is shown, on video, to have kicked a senior librarian in the stomach at a community meeting for housing homeless people Wednesday evening.
0
Mar 2, 2018 10:41 AM By: V.I.A. 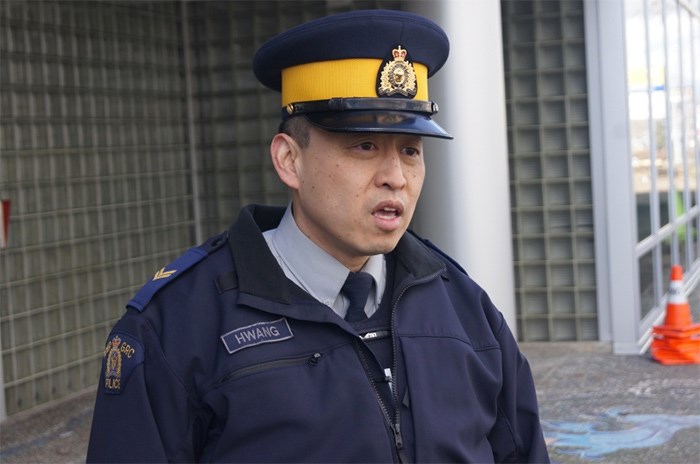 Richmond Mounties are vowing to catch the man who is shown, on video, to have kicked a senior librarian in the stomach at a community meeting for housing homeless people Wednesday evening.

“The victim — that’s someone’s mother, grandmother, sister, partner, wife. This type of behaviour is not tolerated here. We will find this person and he will be held accountable,” said Richmond RCMP spokesperson Cpl. Dennis Hwang, who has worked over 20 years in Richmond for the detachment.

He said the incident goes against what Richmond is known for.

“Generally speaking, for any community gatherings, they’ve always been quite peaceful. So, I mean, that’s one of the things we’re well known for in the city: co-exist, diversity and community. So this is a bit troubling for us,” said Hwang.

Richmond RCMP has yet to verify the YouTube video showing a younger Asian man kicking the librarian at Richmond Public Library Brighouse Branch. He said in such cases, police investigators will contact the video’s creator.

He said investigators will also be scouring cameras of the facility.

Announced earlier this month, the project is an effort to combat the growth of homelessness in Richmond which has increased by 84 per cent since 2014, according to the Metro Vancouver homeless count. The homes will be operated by RainCity Housing, a non-profit housing organization and will offer support services for residents around-the-clock.

Currently, the province is contributing $5.9 million to construct the units while the city is contributing land at 7300 Elmbridge Way, presently an off-leash dog park, for the homes for up to five years.

“Looking at the city’s inventory we looked at a few options,” Rautenberg said about the property. “This site was determined to be the most suitable due to the close proximity to transit, Canada Line, buses and proximity to services and resources in the neighbourhood.”