Every Friday, Saturday and Sunday, say residents near the Richmond Night Market, the noise from the event pierces through their closed windows.
Jul 17, 2019 2:37 PM By: Richmond News

The noise is so bad the Steele family is being forced to sleep with their windows closed, leaving them to suffer in the sweltering summer heat.

However, the din isn’t coming through the walls of their 11th-floor apartment block at the Westin Wall Centre on Corvette Way, near No. 3 Road and Sea Island Way. 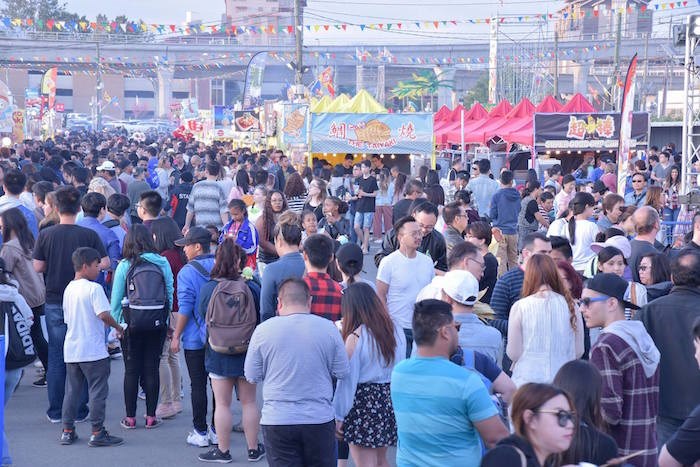 It’s blasting all the way from the Richmond Night Market, which lies about 400 metres away and opens every Friday to Sunday evenings from May to October.

“You can’t leave for four or five hours a night there.”

According to Steele, she can hear the main stage clearly through shuttered windows, which renders her and her family, who all work shifts, unable to sleep.

Steele said the sound from the main stage speakers projects directly into her living room.

And every Friday, Saturday and Sunday, the mom of two adult children said the noise pierces through the closed windows.

“I can hear their announcements from the stage. I can hear the music. Last week, they had a drum set (amplified) – I can tell, because it was crashing through,” said Steele.

Steele told the Richmond News that she first contacted the City of Richmond’s bylaw department on May 19, shortly after the market opened for the year.

Steele wants to set a precedent so that others aren’t bothered by the noise coming from the night market, and doesn’t believe that she is the only apartment affected.

After a number of follow-up conversations with the city’s bylaw department, Steele was then visited twice by Vancouver Coastal Health (VCH).

“It was determined that the ambient noise in the area, when the market is not open, is already above the limit, likely due to traffic,” said Akins, adding that the market doesn’t produce a significant amount of noise.

“It can’t be determined that the market contravenes the bylaw,” Akins said.

Steele said she tried multiple times to contact Target Productions, the company that runs the night market, leaving several voicemails before she was finally able to speak to a representative.

“She asked if I was calling for a noise complaint,” said Steele.

“I said I was and that something needs to be done, that I should not have to listen to the sound from their main stage amplifying directly into my living room. She said she ‘would get them to turn it down.’”

Steele added that while the sound was “marginally better” by the end of the evening, she doubted that the change would be permanent.

The News has reached out to Target Productions for comment.

According to the city, only one complaint about the noise from the market was made this year, and that none have been made in the past few years.

VCH also confirmed that they have not received any other complaints about the market, and that the noise from the market isn’t considered a health concern.