Image: Screen grab from security footage posted to Reddit. A man suspected of carrying out a series of doorstep parcel thefts in Richmond has been arrested and charged by the RCMP.
Jun 22, 2018 1:18 PM By: Glacier Media 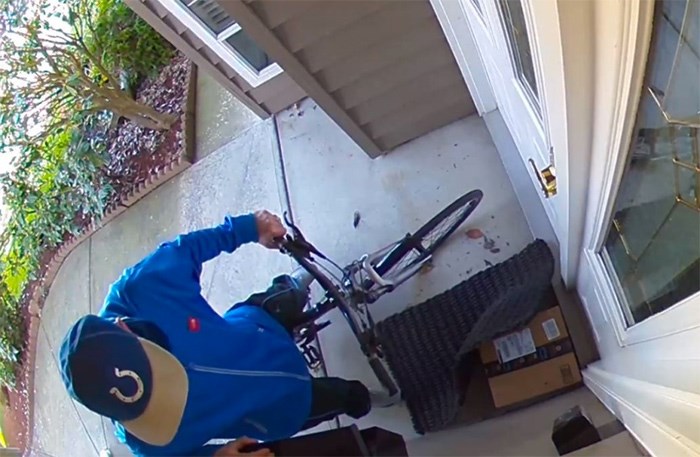 A man suspected of carrying out a series of doorstep parcel thefts in Richmond has been arrested and charged by the RCMP.

Dana Adam Halifax, 40, was allegedly captured on video committing the crime and made the news headlines back in April.

The April 2 video showed the suspect stealing the parcel from a home in the 5000 block of Lackner Crescent, south-west of No. 2 and Francis roads, before making off on a bike.

After a lengthy investigation by Richmond RCMP’s Property Crime Unit (PCU), the suspect was identified and connected to similar crimes in Richmond spanning from March to April.

And, as of Wednesday, the BC Prosecution Service has approved five charges.

“Stealing parcels or mail is theft, pure and simple. We were very determined to identify the suspect and painstakingly followed the evidence. That determination proved very fruitful.”

The video footage in April was posted to Reddit and showed a man, who was wearing a blue sweatshirt and an Indianapolis Colts hat, riding up to the front door on a bike.

He uncovered the package under the mat, looked in the mailbox, grabbed the package, put it on the back of his bike and rode away.

For those who aren’t dissuaded from ordering online, in spite of thefts such as this one, Richmond RCMP recommended having packages delivered to a workplace, a friend’s home if you’re out of town or to a retailer’s locker where packages are received.

They also recommend requiring a signature confirmation when the package is delivered.

But most importantly, if you catch a thief on camera, make sure to report it to police and don’t just post it to social media.