Six months after the fact, millions of dollars raised and countless celebrity endorsements later, the Rio Theatre has been officially saved.
0
Jul 31, 2018 12:05 PM By: John Kurucz 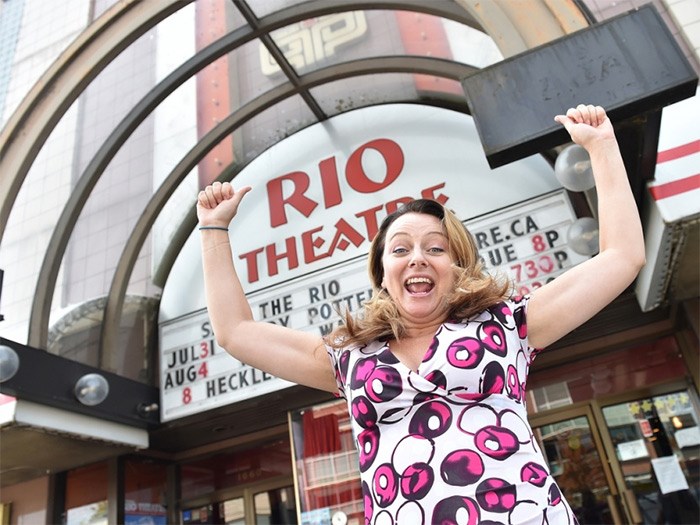 Corrine Lea is primed and ready for her first vacation of 2018.

Having spent every day of the past six months lobbying, saving and recruiting, Lea’s work appears to be over.

The Rio Theatre has been saved.

Lea is now Alberta-bound for a family reunion.

“It’s like when you intend to climb a really high mountain and once you get to the top someone asks you if you’re surprised — the answer is no, because I planned to climb that mountain the whole time,” Lea told the Courier Tuesday.

Lea teased the Rio’s fate in Facebook post Monday night and a press release from the city Tuesday all but spelled out the 80-year-old theatre’s future.

A $375,000 conditional grant has been issued to the Vancouver Art House Society, a non-profit devoted to preserving the city’s cultural landmarks, including the Rio.

The grant’s conditions include that the theatre be used as a cinema or live entertainment venue for the next decade. The grant is also dependent on getting the remaining money — roughly another $375,000 — through federal or private investors.

Lea said getting those last dollars is not an if, but a when. Finalizing the transaction will happen by early September. Outside of the city’s grant money, Lea also got a larger mortgage. The Rio team is launching one last crowdfunding push via FrontFundr that will go through August.

“There’s still room for investors to get on board, and that will help us lower the mortgage,” she said. “Until the paperwork is done, we’re not done fundraising. We’re just taking a moment to say the future of the Rio is no longer uncertain.”

Lea got the certainty after a meeting with city staff on July 25 when the grant details were finalized. Only a handful of people knew the theatre would be saved and Lea sat on the news for almost a week.

“It was really f***ing hard,” Lea said. “I wanted to tell everybody but when you’re dealing with government bodies, they have their own process and their own timing as to when things get announced.”

Lea’s mission to save the Rio began in February when news of the theatre’s sale became public, despite the property having been on the market since April 2017. She enlisted every manner of public, private and celebrity help imaginable: the most successful GoFundme campaign for a theatre in the platform’s history, a pair of sold-out shows by comedian Kevin Smith and shoutouts from Hollywood A-listers and Vancouverites Seth Rogen and Ryan Reynolds.

By aligning the theatre with the non-profit Vancouver Art House Society, Lea was able to attract minority shareholders in the property and ultimately receive the city’s grant money.

“I always really believed that we would do it — my confidence never wavered,” Lea said. “For sure I would get tired and I would feel stress and there were lots of ups and downs. I kept my eye on that goal.”

A proper celebration for the Rio’s renewed life will happen in early September, though details and exact dates will be finalized in the coming weeks.

Between now and then, Lea is relishing her change in title. Gone is “theatre operator,” while “theatre owner” is here to stay.

“It feels fantastic,” she said.