Roof of Vancouver police station is a hive of activity

Three floors above the entrance to Vancouver Police Department’s Cambie Street precinct is a sprawling outdoor deck that is more than just a peaceful oasis.
0
Jun 7, 2019 10:06 PM By: Mike Howell

Sarah Common, CEO and co-founder of Hives For Humanity, says the beehives atop the police station help break down of barriers between police officers and people who have had trouble with the law, experienced homelessness or are living with a mental illness, or a drug addiction. Photo Dan Toulgoet

Three floors above the entrance to Vancouver Police Department’s Cambie Street precinct is a sprawling outdoor deck that is more than just a peaceful oasis for officers to have lunch.

It’s also a place for bees to make honey.

And lots of it.

Last August, two colonies of bees living and working in hives in the far corner of the deck, which also serves as a vegetable and flower garden tended by officers and staff, produced 300 pounds of honey.

Not just any honey, but “VPBee honey,” the kind of honey that goes “bee on the call,” as indicated on the lids of the jars of the golden syrup sold to officers and donated in the community. 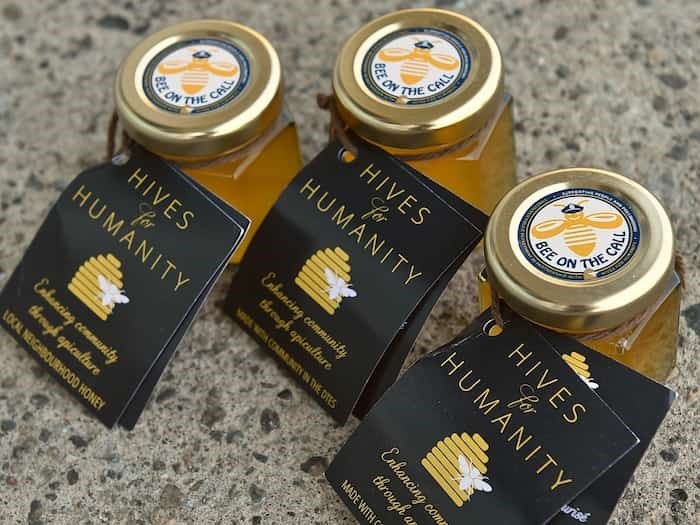 The VPD honey is sold to officers and staff, and donated in the community. Photo Dan Toulgoet

Sarah Common has heard many puns about the line of work she’s in as CEO and co-founder of Hives For Humanity, but she takes that type of groan-inducing comedy in stride.

What really matters to Common is the bees supplied to the police department do a lot more than produce honey or provide fodder for dad jokes.

It’s how the bees help connect otherwise disconnected communities and serve as a therapeutic outlet for the stressed, the troubled and the disadvantaged that matters to Common.

“The bees are an access point,” she said, sitting at a picnic table on the deck on a recent sunny Wednesday morning. “Bees and gardens can be a connector, and can foster different kinds of relationships. I think it’s amazing that a little spot like this can do that.”

What she’s referring to is the breaking down of barriers between police officers and people who have had trouble with the law, experienced homelessness or are living with a mental illness, or a drug addiction.

Beekeeping workshops that have brought together officers and Downtown Eastside residents who fit into those categories are an example of that fostering of relationships, she said.

“The hope is that when those officers are on the beat, or responding to crises in our city, is that they have another kind of relationship to hold,” Common said. “The long-term goal is that we build connection through nature, and through the experience of caring for things outside of ourselves.”

The program is in its fifth year, and each year the number of bees has grown and so has the amount of honey. None was produced the first year because of a late start, but the 300 pounds harvested last year was a record.

At harvest time this summer, it’s anticipated that 120,000 bees will be active in the two hives before the honey is extracted and put into jars.

Sales topped $3,000 last year, said Const. Alison Bale, who is head of the department’s gardening committee. Prices range from $4 for a 45-millilitre jar to $20 for a 266 millilitre jar.

“Lots of people get it as Christmas presents,” said Bale, who works out of the VPD’s education and training unit when she’s not volunteering in the garden. “We’re down to about a dozen jars until the fall. It sells out really quickly.”

The honey is not sold to the public.

Some of the honey is donated, but all proceeds from the sales go to Hives for Humanity, which has 19 apiaries in the city, including the Downtown Eastside and the Yukon shelter, which is down the block from the VPD’s Cambie Street precinct.

Coincidentally, the VPD garden, which is spread over a few plots on the deck, produces enough vegetables that twice a week a large bin of the fresh kale, tomatoes, onions, garlic and other food is donated to the Yukon shelter’s kitchen.

Blueberries and strawberries are also grown, along with a variety of pollinator plants that serve the bees well. In fact, Bale said, the honey “tastes like flowers.” 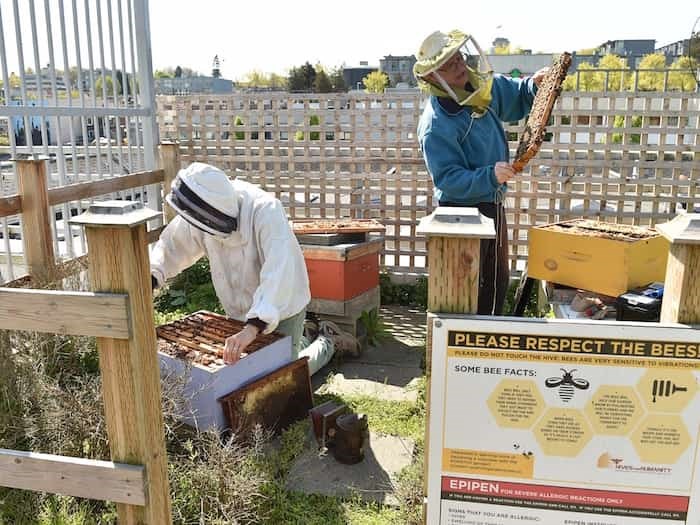 On the day of the Courier’s visit, volunteers Phil Laflamme and Leslie Williams from Hives For Humanity were inspecting the hives. The consensus was the bees looked healthy and signal a good year.

They were doing this as officers started to gather for lunch. Various sounds of birds carried across the deck. A hummingbird hovered near a fence.

Bale agreed that people walking on the streets below probably have no idea of the tranquil setting. She joked she doesn’t want anyone to know it exists.

Common has a more philosophical take on the space.

“Our culture is go-go-go, busy, keep moving and looking down. And what we hope the bees and the garden do is get people looking up at each other and connecting through nature.”