The Royal BC Museum in Victoria recently changed its policies to no longer collect or study ancestral remains.
0
May 22, 2019 7:18 AM By: The Canadian Press

VANCOUVER — Letters to Scotland sent by a woman from the small settlement of Victoria around 1850 gave Dianne Hinkley more insight into why the bones of her ancestors may be spread around the world.

One of the letters says that "skulls were all the rage" in the new community, Hinkley said. 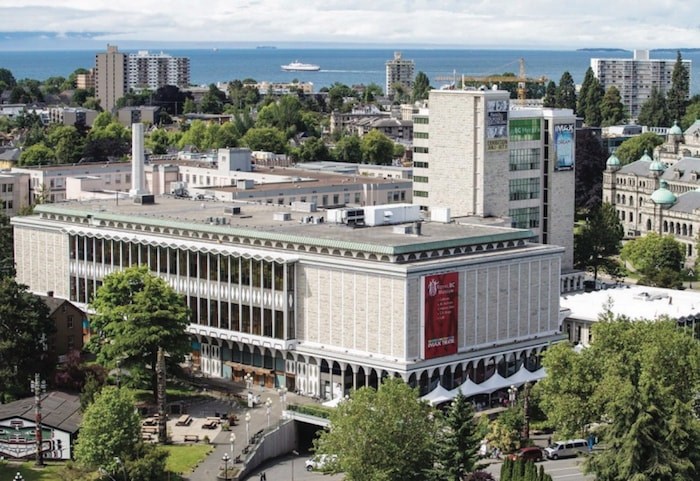 The Royal BC Museum in downtown Victoria. Photo by Darren Stone/Times Colonist

"It was all the fashion that you had to have a skull on your mantel piece," Hinkley recalls the letter saying.

The woman's letter said she found the remains on rock piles that were all over the place and that she "would try to get them a couple of skulls, so they can have them in their house for fashion as well," Hinkley said.

Those rock piles were actually burial cairns and the pilfering is one of the many reasons why Hinkley has found Cowichan artifacts and remains from Russia to the United Kingdom and from Israel to South Africa.

That search has been helped with a repatriation grant from the Royal BC Museum, which recently changed its policies to no longer collect or study ancestral remains.

The museum has also announced that anything it acquired from Indigenous Peoples during the anti-potlatch years, from 1885 to 1951, will be considered eligible for repatriation because it was obtained at a time of duress.

During those years, the federal government banned potlatch ceremonies, which were important social events where valuable gifts were given to show generosity and status over rivals. The government saw the events as anti-Christian and a waste of personal property.

Lou-Ann Neel, the repatriation specialists for the Royal BC Museum, said by the time the ban was lifted, much Indigenous wealth had been lost.

"Our regalia was gone, our masks were gone, some of them were burnt by missionaries, some of them were just taken and confiscated. So you can't hold a potlatch without these treasures," said Neel, who is part of the Mamalilikulla and Kwagiulth people in Alert Bay, B.C.

Neel said the loss of their belongings started with the colonial belief that Indigenous people were endangered and dying out.

"That really sparked a collecting frenzy, that sent out people: anthropologists, military, adventurers or self-proclaimed pioneers. (They) just felt like they had permission because the general sense across Canada and the U.S. was that 'Indians' would soon been gone."

Hinkley said her research shows that between 1870 and 1930 museums were popping up around the world and they needed something to display.

She said collectors from around the world would land in the villages and buy or take anything they could.

"Their bodies, the skeletal remains and all of that was sold to museums," she said.

"There must have been essentially very little cultural materials left in those villages. They took everything, they took cedar woven maps that hung on the walls, they took knitting needles, everything, fish hooks, you name it, they collected it."

Hinkley said the change in the museum's policy is "huge" because it allows Indigenous people in the province to find more information about their artifacts. She said some museums, especially those in the United Kingdom, refuse to even speak with them about the artifacts.

The Royal BC Museum distributed more than $580,000 in repatriation grants last year to First Nations, helping them begin the process of finding and acquiring their ancestors' remains and artifacts. It has also written the Indigenous Repatriation Handbook to help as a guide.

The museum has about 700 ancestral remains. Neel said most of them were handed over to the museum through development when roads or homes were under construction and the bones were unearthed.

Because the museum is no longer a repository for remains, she said they'll be searching through the records to determine where the bones were found and will ask First Nations what they want to do with their ancestors' remains.

"It's the right thing to do and the right way to do it."

The B.C. museum has about 15,000 Indigenous artifacts, and Neel said a portion of those would have been taken during the potlatch years. They are starting the task of looking at every object to determine how it came to the museum, she said.

Neel said Indigenous communities are excited about the prospect of having their ancestors and ancient treasures returned.

"There are obviously things in the collection that were purchased legitimately, there's a paper trail for them and those things really do legitimately belong to the museum collection.

"What the committee did was take a close look and said really what we're concerned about are the things that were not acquired in the best of times. Some communities were still very much under duress, even after the potlatch ban was dropped."

For the Cowichan, Hinkley said the other challenge is they don't have anywhere to bring their treasures home. But she said the repatriation negotiations tend to drag and that will give them time to get their museum ready.