From left, undergrads Richard Kim, Gabrielle McLaren, Helen Luo and Melanie Hiepler were some of the winners in this year’s inaugural SFU Student Learning Commons’ undergraduate writing contest.
Mar 12, 2018 9:15 AM By: V.I.A. 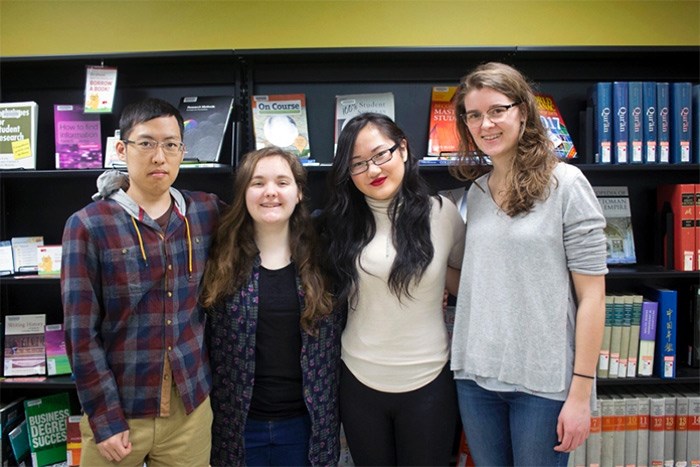 Ever wondered how your best university essay would have stacked up against other students’ papers?

SFU undergrads got a chance to find out during a new writing contest this year.

“For us it’s another way to celebrate academic excellence,” said Julia Lane, a writing services associate with the Student Learning Commons and one of the organizers. “Usually only the professor or the TA who’s actually marking it ever reads the paper, so it just gives it a wider audience.”

The open category featured essays written by any second- or third-year student in any discipline.

The SLC peer educator category was for students who volunteer at the Student Learning Commons helping other students with their writing.

The essays, all of which had to have been written in the 2017 academic year, were already done, so the contest wasn’t any extra work for students.

“Nobody has time for that,” Lane said with a laugh.

In the open category, Richard Kim won the first place prize of $200 for a history essay titled “Just or Injust: Scholarly Attitudes on the Moral Legacy of British Response to the Mau Mau Rebellion.”

Honourable mentions went to Daniel Prisk for "Dirty Theory: Sketches of an Anthropological Account of Mountain Biking" and Sarah Yorston for "How To Get Away With Rape: Charter Protections and the Right To a Fair Trial."

In the peer category, organizers awarded one $200 prize and that went to Melanie Hiepler for her paper “Redefining Modernism: An Exploration of Modernist Possibilities in Icelandic Saga.”

Honourable mentions in the peer category went to Kate Ellison for “A Place of Resistance: Oppenheimer Park, East Vancouver, Coast Salish Territories” and Mariam Ali for “Reopening the Canadian Embassy in Iran.”

The winners were recognized at an event on Jan. 31, and their work will be published in an open access journal through the Student Learning Commons website and the SFU library.

Plans are already underway for the contest next year, according to Lane.