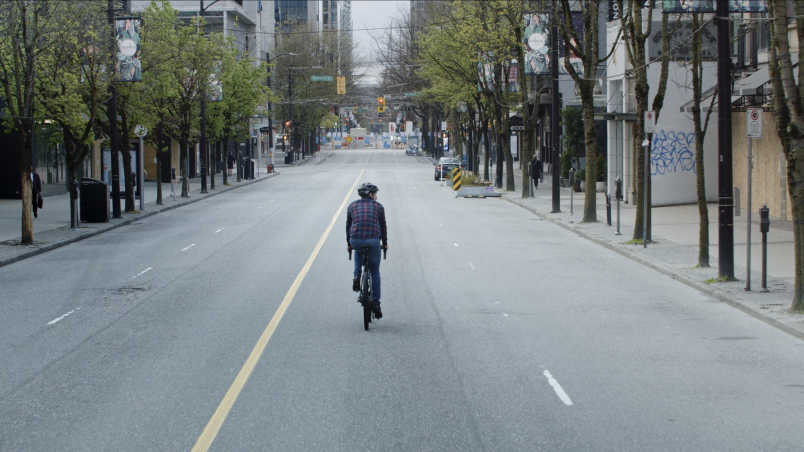 A still from 60 Day Cycle. Photo courtesy of the National Film Board.

When Jo Osborne signed on with Squamish-based Anthill Films, it was as a sound supervisor, not a performer.

However, Osborne has a starring role in the company's latest short, 60 Day Cycle, where he's a cyclist exploring downtown Vancouver during the COVID-19 pandemic.

"I didn't think I'd actually have the camera pointed at me for one of the shoots," he said.

The five-minute film, commissioned by the National Film Board (NFB) and available on YouTube, depicts Osborne starting in a Deep Cove forest and then wending his way through the city's empty streets, which gradually start to show more signs of life. Narration is provided in the form of CBC radio clips.

Co-director and writer Darcy Wittenburg was thrilled that the NFB approached them about the project.

"They wanted to do something to capture the feeling of the city and the emptiness of it," he said. "Us, having a cycling background, naturally we starting thinking about a little thread that could carry us through the piece.

"'Maybe it would be neat to experience the city through the eyes of a cyclist riding through the city as you would, cruising around and taking in the sights.'"

Admittedly, the idea shifted as more and more became known about the virus and its effects, and Anthill responded to the constantly changing information.

"It went from being really, really empty to things slowly starting to open up. That's when we kind of shifted our idea a little bit where we decided to make it as though he's experiencing it over time," Wittenburg said. "We wanted to introduce the people and the fact that people are still in the city and still living there. We had this idea in the back of our minds: 'The streets are empty, but people are still here.'"

Co-director and co-cinematographer Colin Jones handled much of the filming, acknowledging that his camera was constantly rolling at the start of the project as he didn't want to miss anything.

"I shot a lot more at the beginning. There was so much happening that I was always anxious to get shots at the beginning," he said. "At first, people weren't sure what to do. Even [seeing] the city workers putting out cones and shutting down Stanley Park, it seemed so timely.

"I shot quite a bit because it's all happening right now, and then we started filling memory cards, it staggered a bit where there were pieces of the storyline in the news that told us, 'This is a moment we need to capture to show the story.'"

With so much unknown at that time, Jones acknowledged feeling somewhat uneasy about the process, though the shoot was done in an entirely physically distanced, as he shot from the back of his truck and with a drone.

"At the start there, you were just trying to get a sense of what was happening because it was new to everyone," he said. "Filming in those streets at first, I was a little wary, being focused on the media and the counts in those early days, it felt like there was not enough knowledge about what was happening with the virus.

"When I was doing those first few shots, I was very cautious. It was definitely a work in process that way. I was very stressed being out there."

One of Jones' major interests, especially considering his work on adventure films, is capturing motion, with shots mimicking how a rider's eyes might wander during a ride through the city at that time. He was thrilled as well to capture the smoke from Stanley Park's Nine O'Clock Gun (fired off two hours earlier during the salute to healthcare workers).

Ultimately, Jones was happiest to portray the city's resilience, as artists painted the plywood used to close up shops and how people adapted to the new world.

"With anything tough in life, it's nice to look back upon it. You can draw inspiration from that retrospective, especially when you are in a better spot," he said. "It is something that Vancouver can look back upon, see that piece, and tell their own stories of what was happening."

On the sound front, Osborne appreciated the opportunity to gather pristine audio, not only in the forest but, with minimal vehicle and air traffic, within the city as well. The main difference he noticed was how many birds he heard, not just because of less noise pollution, but also because creatures returned to the city.

Wittenburg hopes viewers can look back at the short years down the line and recall what this strange time was like.

"I hope that people look at it as a historical record and an artistic take on what the experience felt like," he said. "I would really hope that this piece stands the test of time and people look back at it for years to come, see it, and be, 'Actually, I remember that. That's how it looked and felt like.'"