A West Vancouver soccer coach says he’s considering filing a complaint after being followed by a West Vancouver police officer in what he says is a case of racial profiling.
0
Dec 5, 2018 7:06 AM By: Jane Seyd

A West Vancouver soccer coach says he’s considering filing a complaint after being followed by a West Vancouver police officer in what he says is a case of racial profiling.

Des Tachie, a coach with the West Vancouver Football Club, said he and one of his players were followed by a police officer at the end of October as they drove to the Royal Canadian Legion to turn in money they had collected during the poppy campaign. 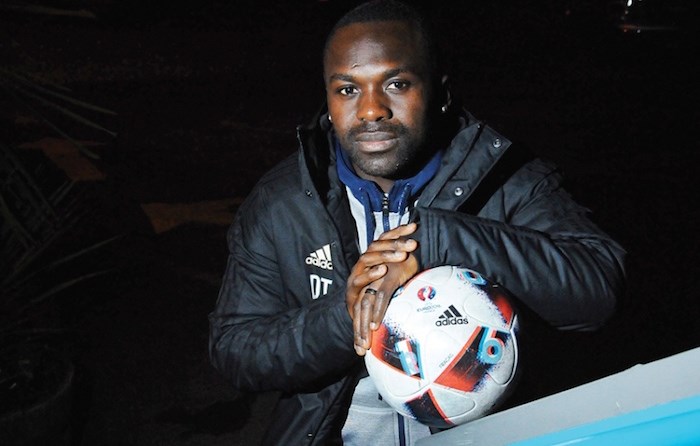 West Vancouver Football Club coach Des Tachie said he feels he was being racially profiled when he was followed by a West Vancouver police officer while delivering poppy fund donations to the West Vancouver branch of the Royal Canadian Legion. The West Vancouver Police Department has denied that was the case. Photo by Cindy Goodman/North Shore News

Tachie says he thinks the only reason the pair was followed by police is they are black.

Tachie said he decided to speak out about the issue because he wants the public to know that some people are still treated differently because of their skin colour – even in West Vancouver. “People think it just happens south of the border,” he said.

West Vancouver police are inviting Tachie to speak to them directly about the incident.

But they said the officer involved did nothing improper and none of the police actions were motivated by race or ethnicity.

“We accept fully our responsibility to police in an unbiased manner,” said Const. Jeff Palmer, spokesman for the West Vancouver Police Department.

Tachie said the incident occurred on Oct. 27 when he and one of his young adult U21 soccer players were among several volunteers from the West Vancouver Football Club collecting poppy fund money for the legion outside Whole Foods at Park Royal. Following their two-hour shift, the pair went to the parking lot and prepared to drive to the legion to drop off the money they had collected, said Tachie. He noticed a police car, but didn’t think anything of it, until he got close to the legion, and noticed the police car appeared to be following close behind him, mirroring his route. Finally, Tachie said as he pulled up in front of the West Vancouver branch of the legion, on 18th Street, the police car pulled up beside him and the officer rolled down his window and asked if the pair were dropping off donations. Tachie said they were, and the police officer drove off.

While the interaction with the officer was minimal, Tachie said he was left upset, and felt targeted because of his skin colour. None of the other volunteers who had been collecting for the legion were followed by police, he said. He said the incident also had a negative impact on the young soccer player with him – who is also black.

“It was his first time going through this,” he said.

Palmer said police haven’t spoken with Tachie directly since the incident. Concerns were brought forward to police by both members of the soccer club and the legion, said Palmer, prompting a review of what happened.

So far, there’s no indication that race or ethnicity motivated the officer’s actions, said Palmer.

He said the police officer saw the pair with the collection boxes in the parking lot and was aware of reports of people stealing donation boxes around the Lower Mainland.

The officer had the police dispatcher try to call the legion to verify the pair was legitimately collecting poppy funds but couldn’t reach anyone, said Palmer.

He added the officer didn’t pull Tachie over, ask either of the men for ID or enter any information into police databases.

Transcripts of police radio conversations during the incident released by the West Vancouver Police over the weekend appear to bear out that version of events.

Ruth Berg, president of the football club, said in the three years the club has been collecting donations for the legion’s poppy fund, no similar incidents have happened before.

“The word racism showed itself immediately,” he said. “If these were two white gentlemen, would they have been pulled over? Probably not.”

Morton said the football club members helped raised about $6,000 for the poppy fund this year.

Palmer said police are still hoping to have a face-to-face conversation with Tachie. “We’re certainly aware nobody likes being followed by a police officer under any circumstance,” he said.

Tachie said he’s considering that, along with the possibility of filing a complaint.

Racial biases exist, said Tachie, even those that aren’t overtly discussed or acknowledged. “I think that conversation does need to be had,” he said.