A two-year-old child has died after being struck in the parking lot at Garibaldi Village Mall on Friday evening, according to Squamish RCMP.

At about 6 p.m. on Feb. 28, RCMP and BC Ambulance were called to the parking lot after a woman and child were struck by a vehicle in the parking lot at 1900 Garibaldi Way, a Squamish RCMP release states.

The incident happened in front of the mall grocery store as the pair were exiting and crossing the parking lot.

Both were taken to the hospital with injuries. The child later died of those injuries.

"We are at the beginning stages of putting together all the details to give an accurate picture of exactly what happened tonight," said Sgt. Sascha Banks in the release. "Anyone who was there and witnessed the incident prior to the event, during the event, or after the collision are asked to come forward to the RCMP if they have not already done so. We are a tight-knit community and our thoughts are first and foremost with the family as well as those who were on scene, responded, and helped in any way they could."

Triance said the family and community are heartbroken.

“This is an immense loss for the community and it's an incredible tragedy,” she said.

When asked about the officers responding to the incident, Triance said the health and wellness of first responders is a priority and they will have access to mental health clinicians as needed.

While the owners of the grocery store did not comment on the incident, they told The Chief their staff is receiving counselling.

By late morning the next day, police were no longer on the scene and the grocery store remained open. Outside the store, next to the crosswalk where the fatal incident took place, people placed flowers, cards and toys in memory of the child. 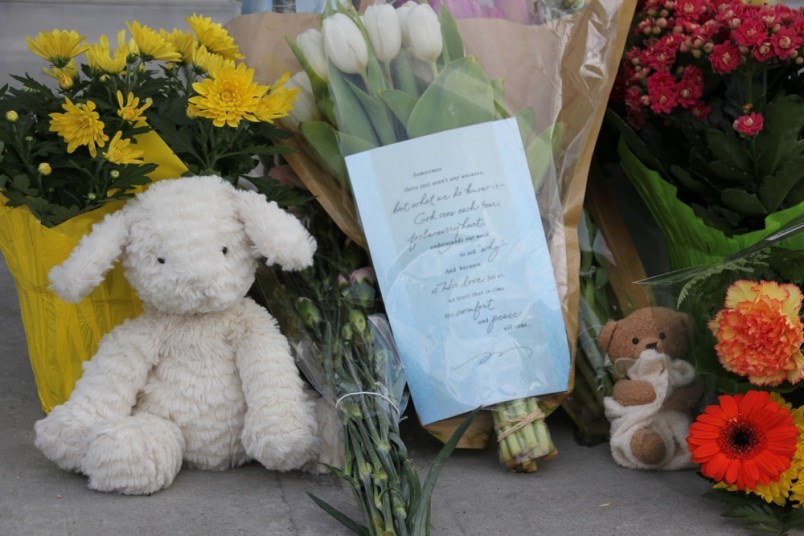 Flowers, cards and toys have been placed near the scene where a Squamish toddler was hit by a vehicle on Feb. 28.Photo: Keili Bartlett/File photo

Squamish resident Brenda Cattermole and her granddaughter laid some flowers and a teddy bear outside the store.

"Because I'm sorry that it happened," Cattermole said.

A Squamish mother of four, Carrie Winstanley, also bought flowers to lay by the scene. She said it's a challenge as a parent to walk through the area with small children and groceries.

"I'm really hurting for this family right now. I don't know who they are, but being a mother of four including a two-year-old, I think it's a pretty hard day, a tragic day," she said.

*Please note, this story has been updated since it was first posted to include that the driver stayed on the scene and later to add investigation information.