It's the largest residential development in Vancouver, which is expected to include the tallest towers in the city.
Dec 17, 2019 6:55 AM By: Business In Vancouver 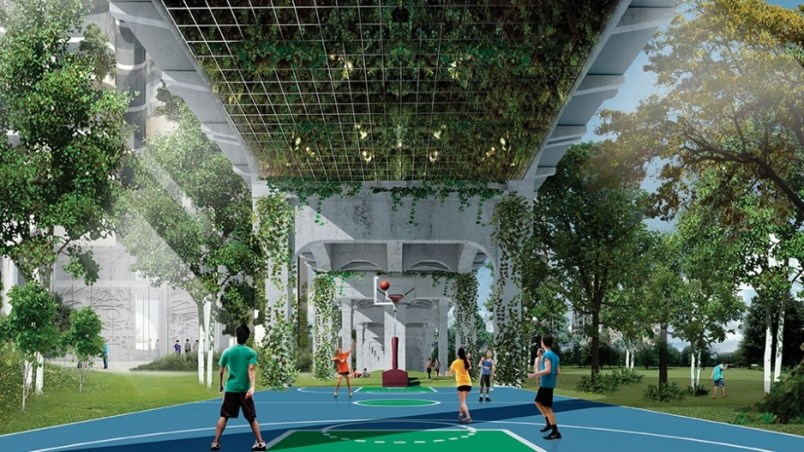 Artist’s rendering shows a recreation area in a planned development that would include 6,000 units of housing on Squamish Nation land at the south end of the Burrard Bridge. Image submitted

A Dec. 10 vote among 827 members of the Squamish Nation has put in motion the largest residential development in Vancouver, which is expected to include the tallest towers in the city.

Being built on First Nations reserve land, the 6,000-unit project is exempt from provincial rent controls, the foreign-buyer tax and the so-called speculation tax that governs all other homeowners in Metro Vancouver, a B.C. Ministry of Finance spokesman confirmed.

It is also unfettered from Vancouver taxes, planning and development regulations.

The Senákw project is on 11.7 acres of Squamish Nation land on both sides of the south end of the Burrard Street Bridge. Plans call for a mix of market rental housing and from 1,500 to 2,000 condominiums.

The unusually shaped property, adjacent to the former Molson Brewery on Burrard Street and close to Vanier Park, was the ancestral village of the Squamish Nation. Squamish members were forcibly removed in 1913 and transported to the North Shore and Squamish Valley. Their homes were burned.

The Squamish Nation reclaimed the land in 2003 after the B.C. Court of Appeal ruled that Canadian Pacific Railway, which had been granted the land for the railway, should return it to the First Nation.

The $3-billion development, considered the largest on First Nations land in B.C. and one of the largest in Canada, will be built in a 50-50 joint-venture agreement with noted Vancouver developer Westbank Development Corp.

Westbank declined comment, referring all questions to the Squamish Nation.

The referendum asked two main questions: whether members approved leasing out three lots in Senákw for 120 years, and whether they were in favour of the proposed development to be undertaken jointly by the Squamish Nation and Westbank.

“The Squamish Nation Council is thrilled with the outcome of this referendum, which was approved by a landslide,” said Khelsilem, a Squamish Nation councillor and spokesperson. “This is truly a landmark moment in our Nation’s history. The Senákw project will transform the Squamish Nation by providing immense social, cultural and economic benefits to Squamish Nation members for generations to come.”

Based on the proposal, towers would be between 36 and 50 storeys, according to Khelsilem.

But to achieve 6,000 homes in 11 towers would require buildings of between 55 to 60 storeys, based on comparison with other residential towers proposed but not yet built in Vancouver.

Currently, the 307-suite Shangri-La Hotel on Georgia Street, at 659 feet and 60 floors, is the tallest building in the city. A proposal from Henson Developments for a site on Nelson Street is for a 60-storey tower with 485 housing units.

“Most of it’s going to be rental. We haven’t decided on the exact mix of strata — if we are going to include it and how much, that’s still to be determined — but we are looking at numbers around 10 to 20 per cent, possibly 30 per cent. But right now that’s going to depend on market conditions and financing,” Khelsilem told BIV.

Responding to concerns that Westbank might push for a component of high-end market housing, Khelsilem quipped, “It might not be the development partner; it might be the Squamish Nation, because we’re largely seeing it as an economic development project.”

In exchange for a long-term lease of the property, Westbank will guarantee the loan required for the development and contribute the equity required. The project will not require a financial investment by the Squamish other than the land.

A key element of the project is the lease agreement, which will span 120 years — enough time, said Toby Baker, senior operating officer for the Squamish Nation and CEO of Nch’kay Development Corp., to accommodate delays and shifting market conditions.

“We wanted to provide enough contingency at the front end of the lease so that if we run into market conditions that aren’t favourable and we have to delay a phase, it allows us 10 years to construct,” Baker explained.

This will result in a 110-year lease for rental units and a 99-year prepaid lease for the condo units, which are to revert to rentals when the lease expires.

Most of the project will be market-oriented, with just 150 to 200 rental units currently allocated for Squamish, which has about 3,600 members. Squamish who want to buy strata units will receive preferential pricing.

Despite the reputation of Westbank for high-design and upper-end units, Khelsilem said the focus is on rental and meeting the social needs of the Squamish community.

“There are opportunities to include other types of units at reduced rates or subsidized rates. A lot of that’s going to depend on how much the Nation wants to include in the project,” he said, noting that these will likely be undertaken with the assistance of financing programs from B.C. Housing and Canada Mortgage and Housing Corp.

Strata units will allow the project to secure profits on an as-needed basis, however.

The first of the project’s five phases could break ground in 2021.

Once complete, the project will bring at least 4,200 market rentals to the city, which is more than four times the 937 rental units that are expected to be completed in Vancouver this year.

Reaction to the project is mixed.

Vancouver Mayor Kennedy Stewart has called the project “a gift to the city” because of the potential for badly needed rental units.

The Squamish would not be required to apply to the city for approval, a city spokeswoman confirmed in an email.

“We would look forward to continuing our long-standing relationship and work with [Squamish] to support their integration with the existing community and city service connections,” the email stated.

Condominiums in the project would be exempt from Vancouver’s empty-homes tax, which was recently increased.

Anne McMullin, president and CEO of the Urban Development Institute, which represents the Vancouver residential development community, had a note of envy in her voice.

“All the power to them. It is an ambitious project,” she said. “The problem we have in Vancouver is that it can take four to six years to get a rental building approved.”

Local residents have voiced concern and support about the scale of the project.

“Particular to this Senákw project, it’s sitting in the middle of an important access point into downtown Vancouver. It is a very constricted site, so that presents quite a few issues to be addressed. How do the people who live there get in and out? What kind of transit upgrades do you need? Certainly the infrastructure around that area would need upgrading.”

While the Squamish Nation is the local government authority overseeing the project and will collect property taxes from residents, it must contract for the provision of city services.

“Now that we have this clear indication to move forward on the lease and the business partnership, we can start finalizing those kinds of details, then move towards very specific agreements with the city around the kinds of infrastructure,” Khelsilem said.