One of Richmond’s most popular fish ‘n’ chip spots is vigorously denying any wrongdoing
0
May 21, 2020 2:39 PM By: Alan Campbell 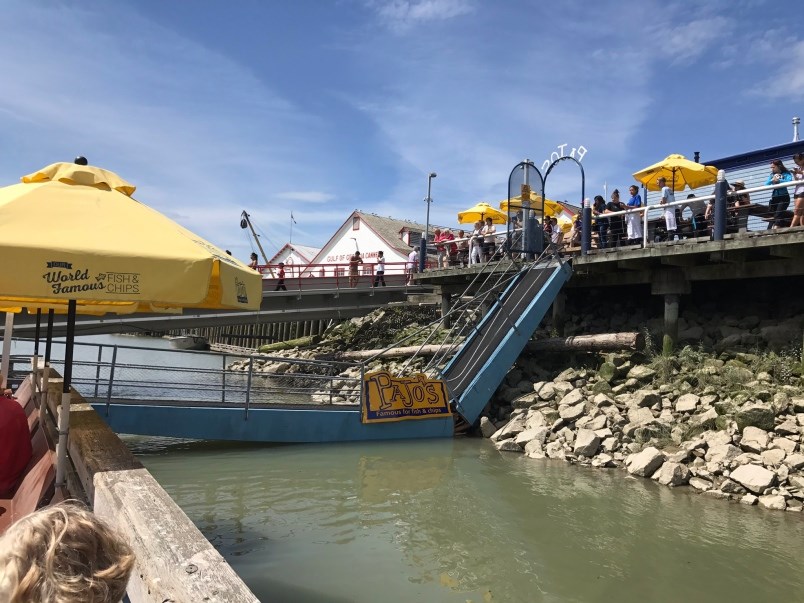 The infamous walkway collapse at Pajo's in Steveston in 2017. File photo

One of Richmond’s most popular fish ‘n’ chip spots is vigorously denying any wrongdoing after its ramp over Steveston Harbour collapsed almost three years ago.

Pajo’s was hit last July with a lawsuit from three members of the Zanotto family, all claiming varying degrees of injury, suffering and financial loss when the gangway leading to the floating diner buckled on July 9, 2017.

The ramp unexpectedly folded in the middle, partially crashing 15 feet or so onto the surface of the water below.

The Zanotto family – Franco, Tina and Tatiana – initially sued Pajo’s, the landlord Steveston Harbour Authority and the federal Ministry of Fisheries and Oceans but have since dropped the latter two parties from the suit.

However, lawyers for Pajo’s last month filed a stiff defence of the Zanotto claims, saying they were in no way negligent and that any alleged injuries suffered by the family either don’t exist or are a result of pre-existing conditions.

Pajo’s denies the vast majority of the family’s claims, including that it had a “reasonable system of inspection and maintenance in place at all material times for the 50-foot long ramp.

“If the plaintiffs sustained any injuries, losses, damages or expenses as alleged or at all, these were not caused by the alleged incident, but are attributable to previous and/or subsequent accidents, injuries, illnesses, conditions or other social or economic, environmental, genetic or biological factors existing or arising before and/or after the alleged incident…” reads Pajo’s response.

They further allege that the Zanotto family “failed to mitigate their

Damages by “Failing to follow recommended medical treatment; Failing to return to regular employment as recommended or allowed and failing to take reasonable measures to modify their work environments to permit continued work.”

Pajo’s further denies that it owed a duty of care to the three claimants and is therefore not liable for any past or future health care costs.

The Richmond News reported last July how Burnaby family the Zanottos were three of the four people on the ramp when it collapsed.

According to emergency services at the time, one of those four was taken to hospital with minor injuries.

Reports from the same emergency services at the time indicated the other three people on the walkway were unhurt.

The court documents don’t state whether the person taken to hospital was one of the Zanottos.

About 20 to 30 customers and staff on the dock were stranded and had to wait for around 45 minutes before emergency services provided a makeshift dock for them to get safely back to land.

In the lawsuit filed last summer, Franco lists neck, arm, thumb, chest, hip, back and shoulder injuries, while Tina lists all the same injuries, along with sleeplessness, anxiety and PTSD.

Tatiana claims she suffered injuries to her back and wrist and also suffers from sleeplessness, anxiety and flashbacks associated to PTSD.

In particular, they allege there was:

No “reasonable system” in place for inspecting the ramp;

A failure to test the ramp’s structural integrity;

A failure to maintain it adequately;

A failure to repair known defects;

A failure to determine load limits;

A failure to warn/post signs with respect to load limits.

A month after the accident, the Richmond News reported how the ramp was not fit for its purpose, according to a WorkSafeBC report.

The report stated that the walkway was not “at the time of collapse, capable of performing the function for which it was used, i.e., serving as a bridge between shore-side and the floating restaurant.”

However, a statement issued from the family-run Pajo’s questioned WorkSafeBC’s findings, saying that regular inspections of the walkway were carried out, with no signs of any issues.

“We conducted regular inspections of the ramp and there was no indication it was not capable of performing the function it was used for.”

At the time, the News was not able to get information on the differences between the old walkway and the new one.

Pajo’s has been operating in the harbour, at the corner of Bayview and Third Avenue, since 1985.