The Street Degree program combines traditional harm reduction training with the street smarts of people who have personally survived the overdose crisis and saved the lives of many of their peers along the way.
May 16, 2019 8:37 AM By: Vancouver Courier

The Ontario-native credits her recent transformation to the Street Degree in Overdose Prevention program — a first-of-its-kind peer-training course that places a unique emphasis on the lived experience of current and former drug users. 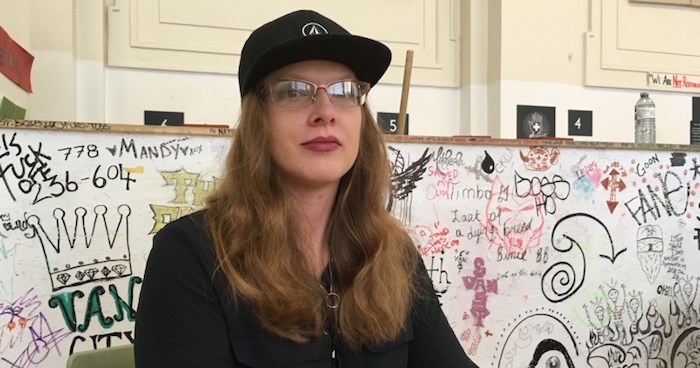 Joy Phelps is one of 14 graduates of the Street Degree in Overdose Prevention program — a first-of-its-kind peer-training course that places a unique emphasis on the lived experience of current and former drug users. Photo by Ben Mussett

“I feel like I've gotten another chance to do something I'm good at, which is taking care of people,” said Phelps, who began working at the Molson Overdose Prevention Site, near Main and Hastings, about six months ago.

“I'm in a healthier space.”

The Street Degree program, a joint venture between the Portland Hotel Society (PHS) and Vancouver Coastal Health, combines traditional harm reduction training with the street smarts of people like Phelps, who have personally survived the overdose crisis and saved the lives of many of their peers along the way — all without any prior medical training.

“We wanted to support [current and former drug users] with training in a different way,” said Jonathan Orr, manager of PHS Overdose Prevention Sites. He co-founded the Street Degree program alongside Sally Kupp, a clinical educator at Vancouver Coastal Health.

“Instead of top-down training where we come and teach them, we wanted to flip it around and have them design the courses, teach the courses, select what topics they wanted to be taught and really put that peer model forward,” Orr said.

Since the program’s launch in 2017, more than 300 peers from 19 different organizations have participated in Street Degree courses. Phelps is one of 14 to have graduated with a Street Degree certificate after completing at least 10 of the 22 available courses.

“We needed to learn from them, and show them that we were learning from them, to value their knowledge and say, ‘We're standing alongside you,’” said Orr. “That knowledge is powerful and important and equal to the knowledge that you would get from a paramedic.”

The program also encompasses knowledge and skills not typically included in standard harm reduction training, resources that can help peers combat stigma wherever they may experience it. Street Degree courses feature everything fromconflict de-escalation to confidence-building exercises such as motivational speaking — a personal favourite of Phelps’.

Kupp and Orr hope Street Degree graduates will find it easier to secure employment and other opportunities going forward now that their knowledge and experience is formally recognized with a certificate.

But Phelps doesn’t appear to be going anywhere soon. “I'm happy working here. I love what I do,” she said about her job at Molson, one of two overdose prevention sites run by PHS.

When asked what her plans are for the future, Phelps flashed her engagement ring.

“I went from being homeless to getting engaged [and] having a job,” said Phelps.

“It's a big change from being depressed, homeless, not knowing what to do with myself, feeling all alone. When you work here, they create a family atmosphere. We watch each other's back.”