An artist’s rendering of the SkyTrain system Surrey Mayor Doug McCallum wants for his city and Langley | SkyTrain for Surrey The fastest-growing cities in the Lower Mainland – Surrey and Langley – desperately need some form of rapid transit.
0
Nov 12, 2018 12:39 PM By: Nelson Bennett 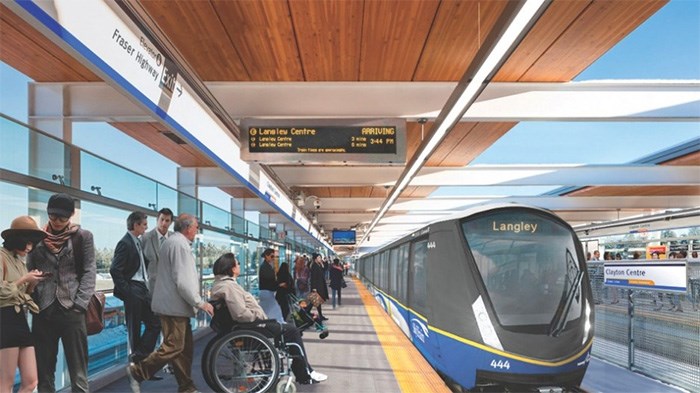 The fastest-growing cities in the Lower Mainland – Surrey and Langley – desperately need some form of rapid transit.

But will the City of Surrey’s insistence on a more expensive system than what was approved mean Surrey will get bumped down the priority list in favour of other regional transit projects, like the Broadway extension to the Millennium Line?

That’s one of the fears raised last week when newly elected Surrey Mayor Doug McCallum made good on a campaign promise to pull out of a light-rail transit (LRT) plan for Surrey and insist on a more expensive SkyTrain system.

TransLink last week put the brakes on Surrey’s new $1.7 billion LRT system and will now reconsider a $3 billion SkyTrain system, following a motion by Surrey city council to cancel its support for the LRT system.

It’s now back to the drawing board. But there are other regional transit projects on the drawing board too, and Surrey Board of Trade CEO Anita Huberman said she fears Surrey could lose its place at the front of the line.

“The Surrey Board of Trade does not want transportation investments to be delayed yet again in Surrey – and that is what will happen with this new direction,” she said.

While Vancouver’s new mayor, Kennedy Stewart, has expressed some support for McCallum’s plan, Richmond Mayor Malcolm Brodie suggested McCallum may have a hard time selling other mayors on the Mayors’ Council on Regional Transportation on his plan.

“The plan that has been adopted is the plan devised by the region, the mayors’ council and TransLink,” Brodie said. “We’ve had full consultation and it’s fully funded. So if Surrey says that they don’t want a component, I recognize that we’re not going to force it on them.

The transit plan for Surrey called for two new LRT transit lines starting from King George station in Surrey – one going east, the other south, connecting the station to Newton and Guildford.

The second phase is a 16.5-kilometre line running from Surrey to Langley Centre. McCallum wants to jump straight to that phase, using an elevated SkyTrain system.

McCallum proposes a rapid bus system for the Surrey-Newton-Guildford corridor, instead of an LRT line.

The difference in capital costs is at least $1.3 billion, although there presumably would be some capital cost savings if buses are used for the Surrey-Newton-Guildford corridor instead of LRT.

The SkyTrain system McCallum wants for Surrey would be of the same type as the Millenium and Expo lines, which use linear-induction propulsion. The Canada Line uses a different type of electric motor.

Whereas the SkyTrain system is automated, an LRT system requires drivers. Affleck expects it would cost TransLink $100,000 per driver for an LRT system.

“There would be no deficit,” he said. “SkyTrain would pay for itself. With light rail, you’d have to be subsidizing it.”

Anthony Perl, director of urban studies for Simon Fraser University, calls McCallum’s proposal “the stupidest” idea he has heard yet for transportation in Metro Vancouver.

His biggest concern is the implications for urban development. Whereas LRT encourages development along the corridor, a SkyTrain system creates “hyper-concentration at the stations – massive skyscrapers – and then deserts between them,” he said.

“That’s not a landscape that I think of as particularly desirable or sustainable, and to pay $2 billion extra to create that, compared to light rail, is why I think it’s the stupidest decision I’ve ever seen, in transportation terms.”

“If you buy a SkyTrain, there’s only one supplier and you can only get it at the price they give to you,” Perl said. “There’s no price competition.”