The woman's arrest followed the investigation of a suspicious fire and the discovery of a body inside the park
Mar 10, 2020 2:27 PM By: Stefan Labbé 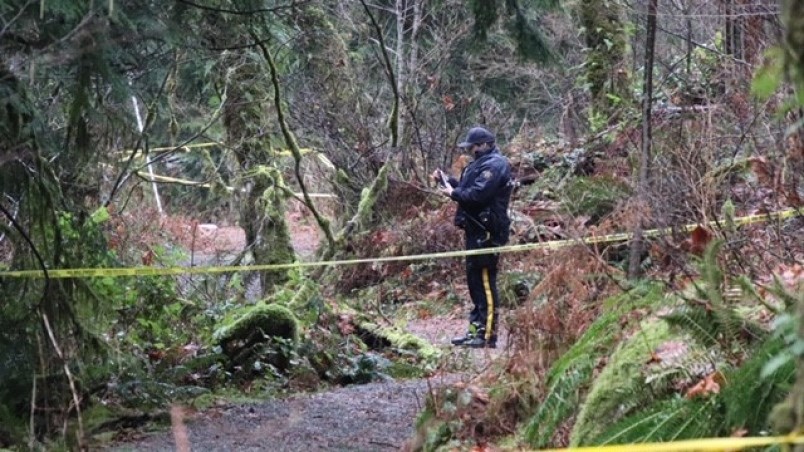 An RCMP officer on scene of a suspicious fire and death in Coquitlam's Minnekhada Regional Park Tuesday, March 10. IHIT is investigating after Coquitlam RCMP found a body and arrested a woman. Photo by Shane MacKichen

Coquitlam RCMP have arrested a woman following an investigation into a suspicious fire and the discovery of a body in the heart of Minnekhada Regional Park.

Today (March 10), police arrived at the park in northeast Coquitlam around 6:15 a.m. after the Coquitlam Fire and Rescue summoned them to the 4000-block of Quarry Road. When Mounties arrived, they found evidence of a suspicious death and arrested a woman at the scene.

“After an initial investigation, we made an arrest, secured all the evidence and called IHIT,” said Cpl. Michael McLaughlin, adding he was unable to provide details due to the ongoing nature of the investigation.

Police said the surrounding area will be cordoned off for a significant amount of time as the Integrated Homicide Investigation Team (IHIT) works with Coquitlam RCMP to investigate, McLaughlin wrote in a press release.

Anyone with information regarding this investigation can call the IHIT information line at 1‐877‐551‐IHIT (4448) or by email at ihitinfo@rcmp‐grc.gc.ca. Should you wish to remain anonymous, contact Crime Stoppers by calling 1‐800‐222‐TIPS (8477).