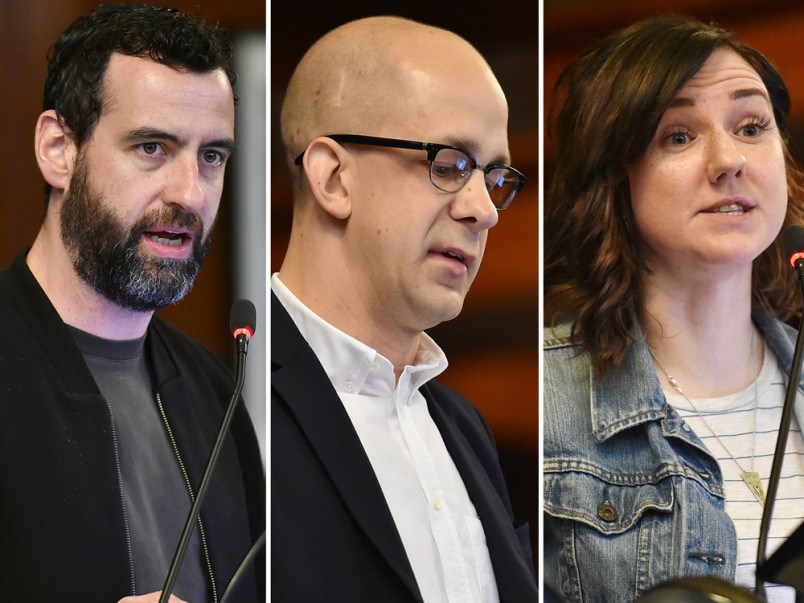 The way Vancouverites experience nightlife is getting a serious re-think, as changes to everything from liquor labels to licensing and live music were passed by council Wednesday.

The suite of wide-ranging policy changes are aimed predominantly at the downtown Granville strip but also extend to restaurants and bars across the city.

Some of the highlights from Wednesday’s four-plus hour discussion include:

Outside of hard-and-fast policy changes, council also agreed to find more money for the downtown safety and advocacy group Good Night Out, while also asking city staff and the Vancouver Police Department (VPD) to examine upping fines for fighting. The current penalty ranges between $500 and $1,000.

A “nightlife council” that will act as liaison between businesses, venues, nightclubs, the arts sector and the city was also endorsed. Council turned down calls for CCTV in the downtown core after a staff memo cited research concluding security cameras were not entirely effective in deterring violence.

About 10 speakers spanning academia, police, business improvement associations and the hospitality and liquor sectors helped shape Wednesday’s discussion, including Mirik Milan, who holds the title of “night mayor” in Amsterdam. Milan has been a direct advisor to the mayor of the Dutch capital for six years.

“I understand that Amsterdam sometimes has this image of a hedonistic Valhalla, but we are not … I think our open-minded and tolerant approach and really focusing on education and harm reduction from a really young age, these are the policies that work,” he said.

Alongside an advisory group of 20, Milan’s work has seen the blending of public and private spaces in Amsterdam and the creation of 24-hour entertainment venues outside the downtown core. His work doesn’t focus exclusively on bars, pubs and restaurants as being nightlife. Instead, art galleries, family-friendly programming and even co-working spaces all need to use the same space to dissuade widespread public drunkenness.

“I really think diversity in nightlife can really tackle these alcohol-related problems,” he said.

Milan noticed an exodus of young people from Amsterdam — similar to Vancouver’s current reality —  starting about eight years ago. Many of them were leaving for Berlin, Germany, which now boasts the world’s second-largest tech sector. Many of them, he said, left because Amsterdam was no longer fun and the battle for talent and employee recruitment was being won by other European cities.

Noting Amazon’s impending footprint in Vancouver — and the 3,000 jobs it will bring — Milan stressed the importance of varied nightlife to keep young people interested in city life.

“A vibrant nightlife makes sure a lot of young creative people want to live in our city,” he said.

Robert Catherall has spent the better part of the last decade studying those in the same sphere as Milan. Catherall works in urban planning and focused his master’s degree studies in nightlife across the world. He spoke to the similar night mayor positions in Pittsburgh, Sydney, Australia and London.

Catherall’s statistics from London’s experience with nightlife and a night mayor, a position introduced in 2016, were particular telling. He said 12 per cent of the city’s workforce, or one in eight residents, work in the evening hours, an overall economy that generates 26 billion pounds a year. All-night tube service — similar to our SkyTrain system, but underground — was introduced in London in late 2016. That move generated 171 million pounds from evening ridership last year alone.

The city is in talks with TransLink to extend SkyTrain hours on weekends, though city staff offered little in the way of updates on those talks Wednesday.

The concept of a night mayor wasn’t formally adopted by council Wednesday, largely because a pair of other policy documents — the Creative City and Vancouver Music strategies — are already examining adopting that post and are expected to be before council this year.

Binge drinking and sexual misconduct were also central to a number of presentations Wednesday. VPD Staff Sgt. Damian Searwar noted the number of bylaw tickets written for fighting on the Granville strip has jumped annually since 2014 — 15 at that point, compared to 87 last year.

Good Night Out Vancouver coordinator Stacey Forrester said her group recently conducted an eight-week study of all things nightlife on the Granville Strip, and talked to about 500 people over each weekend in that timeframe. Overall, 87 per cent of respondents didn’t feel safe in, or moving through, the Granville strip, an area of town she noted as having a “very precarious” reputation.

“I get emotional when I think about how harassment and fear of violence prevents some people from partaking in the rich music, arts and cultural aspects of our city,” she said.

Like Milan, Downtown Vancouver Business Improvement Association CEO Charles Gauthier stressed the need for diversifying the uses of Granville Street — making it more family friendly and accessible to groups through varying the business offerings along the street.

News that the former Tom Lee building — 7,800 square feet of space — will soon be home to a co-working business that will house about 1,000 employees should help shift how Granville Street is used and perceived.

“I think it’s going to turn the street around,” Gauthier said.