The City of Vancouver will meet the goal of opening 600 units of temporary modular housing by early next year now that the director of planning has approved a 52-unit complex at 898 Main St.
0
Oct 10, 2018 10:42 AM By: Vancouver Courier

The City of Vancouver will meet the goal of opening 600 units of temporary modular housing by early next year now that the director of planning has approved a 52-unit complex at 898 Main St. The approval was announced Oct. 9.

The site at the southwest corner of Union Street and Gore Avenue is the last of 10 locations across the city that have been designated for temporary modular housing. Construction and operation of the buildings has been made possible through $66 million in funding from the provincial government.

The 600-unit goal has actually been surpassed slightly — a total of 606 units are being constructed and 306 of those have already opened. 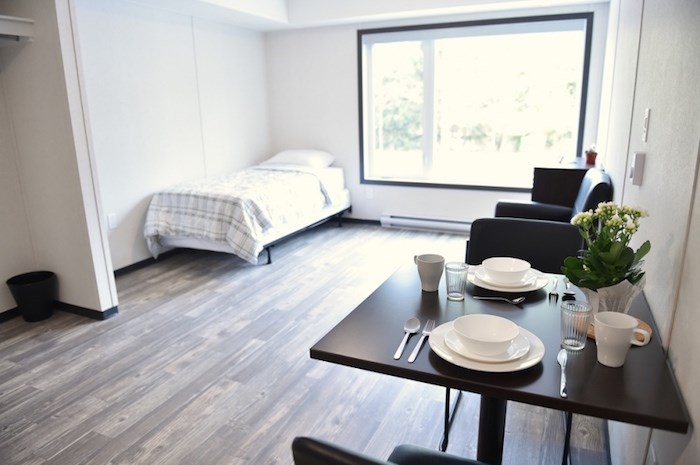 “I am thrilled that we’ve reached our milestone of providing 600 temporary modular homes in neighborhoods across Vancouver in just one year,” Mayor Gregor Robertson said in an Oct. 9 press release. “More than half of these new homes have already welcomed their first residents, with the remainder expected to open within the next few months. Everyone deserves a safe place to call home and I am very grateful to the B.C. Government for partnering with the City of Vancouver to provide people with a roof over their heads and the support they need to get back on track.”

BC Housing has picked PHS Community Services Society to operate and provide support services such as life skills training and employment preparation for the building at 898 Main St. Residents will get two meals a day.

Each 320-square-foot unit will feature a kitchenette, bathroom and living/sleeping area.

Six will be wheelchair accessible. The building will also include an amenity space with a commercial kitchen, laundry facilities, an administration office, and meeting rooms for the staff and residents.

During the development permit process, 140 people attended information sessions. The city received 120 comment cards and 100 emails. As a result of feedback the building position was changed to retain as many trees as possible, and the exterior colour of the building was changed.

A community advisory committee is being formed with representatives from PHS, Hogan’s Alley Society, nearby residents, local businesses, Chinatown, Vancouver Coastal Health, BC Housing and the City of Vancouver.

Construction is expected to begin in December and be completed by February 2019.

The site at 898 Main Street, the Hogan’s Alley Block, is identified in the North East False Creek (NEFC) Plan as a location that the City of Vancouver is committed to exploring -- with the involvement of the Black Community -- land trusts, long term leases, and the establishment of a cultural centre.

The City, BC Housing and PHS are exploring opportunities with the Hogan’s Alley Society Board for the temporary modular homes to reflect and advance the long-term vision of this site developed by the Black community as part of the NEFC plan, according to a press release from the city.

The project at this site will prioritize the needs of Black and Indigenous people, who face persistent social and economic exclusion.