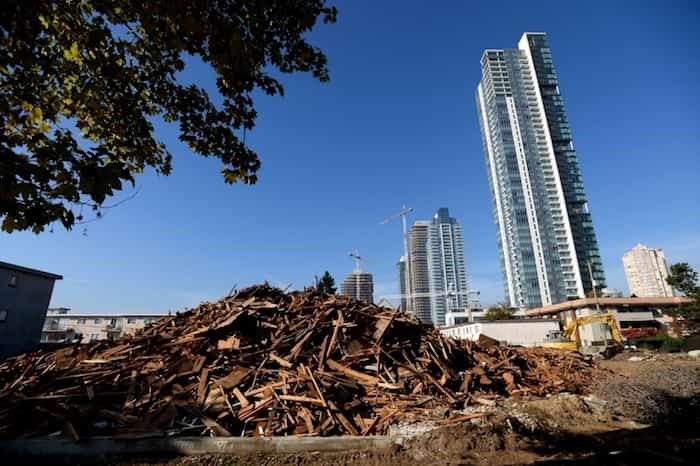 Burnaby renters facing demoviction (eviction prompted by redevelopment) are now entitled to a suite of new protections that will make them the “best looked after tenants that Canada has ever seen,” according to Mayor Mike Hurley.

On Monday, city council unanimously approved a revised tenant assistance policy that closely resembles one of the key recommendations from the Mayor’s Task Force on Community Housing.

The new policy was approved in principle, with stakeholder consultations to follow before it becomes law. But Hurley has promised the new protections will be extended to all applicable redevelopments going forward.

Developers will have to support tenants displaced from purpose-built rental buildings with five or more units.

When the tenant moves to a new place, the developer will have to cover their moving costs (up to $1,400) and “top up” their rental payments so they are paying the same as before.

Tenants will then have the right of first refusal to move into the replacement building once construction is complete. They will continue paying the same rent as before (subject only to the provincially mandated maximum annual increases). Developers will again have to cover moving costs when tenants move back.

“These changes are important,” Hurley said. “Our communities are evolving, but redevelopment has impacts, particularly for those who rent their homes. The revisions to our tenant assistance policy will ensure that Burnaby residents can continue to live in their community, even as it grows.”

The tenant policy will also extend to some tenants who were evicted in “bad faith” or bought out of their apartment within 24 months of a rezoning application.

Murray Martin, a member of the city’s now-defunct housing task force, said he was glad to see this provision, which goes further than the task force’s recommendation. The housing activist said he is aware of some 300 apartments developers have emptied out in recent months using “unscrupulous tactics.”

“The apartments are sitting empty and they’re perfectly usable in the middle of the worst housing crisis the city has ever seen,” he said. “It’s insane.”

Martin said the policy will be “the best in Canada, by far.”

Anne McMullin, president and CEO of the Urban Development Institute, said she is “strongly” supportive of the tenant assistance policy.

But she said she was concerned it might go too far.

“I just think that we always have to be careful that it's not so onerous that we're not able to build new rental – and that's the overall objective when we've got a zero vacancy rate,” she said.

McMullin, who was also a member of Burnaby’s housing task force, said land, construction and taxes are collectively ballooning costs for builders, making the construction of new rental increasingly difficult.

She said developers would be able to build more rental units if the city offered more incentives, such as allowing fewer parking spaces, smaller units and more density.

City staff plan to hold stakeholder consultations before presenting the final version of the policy to council at a later (unknown) date. Hurley said he expects only minor tweaks to the policy before its final version becomes law.