You don't see this every day: A Tesla was spotted driving itself around a shopping centre parking lot in Metro Vancouver on Monday afternoon.
0
Nov 5, 2019 6:44 AM By: Richmond News 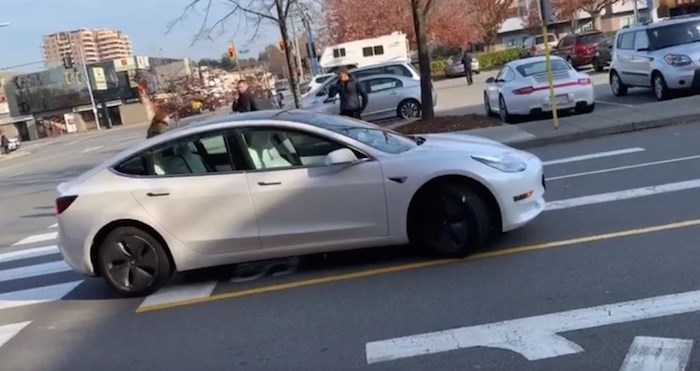 UPDATE: The Richmond News has learned the vehicle was being controlled by a mobile app. Read more about that HERE. The original story follows below.

Rarely a day goes by without something crazy happening on Richmond’s roads.

However the barometer of bizarre raised a few notches on Monday afternoon when a Tesla vehicle was spotted “driving itself” around the Richmond Centre parking lot.

A Richmond News reader contacted the newsroom with a video she’d filmed at about 2 p.m., showing the driverless, white Tesla Model S moving slowly through the east parking lot.

Many people were taking photos and filming it and, at one point, it stops and is then passed by a faster-moving vehicle.

The reader said a security guard from the shopping mall came outside and was chasing the driverless vehicle for a short time, before what is thought to be a friend of the owner appears.

This is so dangerous, I’ve never seen anything like it,” the reader told the News.

“I’ve no idea whether the owner was controlling it remotely or it was driving itself.

“The owner showed up and the car stopped. Eventually, the owner got in and drove away.”

She said her friend overheard the man telling the security guard that the car was being controlled remotely from a different shopping mall.

Another video shows what appears to be the driver loading something into the trunk and driving away.

The News has reached out to Richmond Centre for comment.