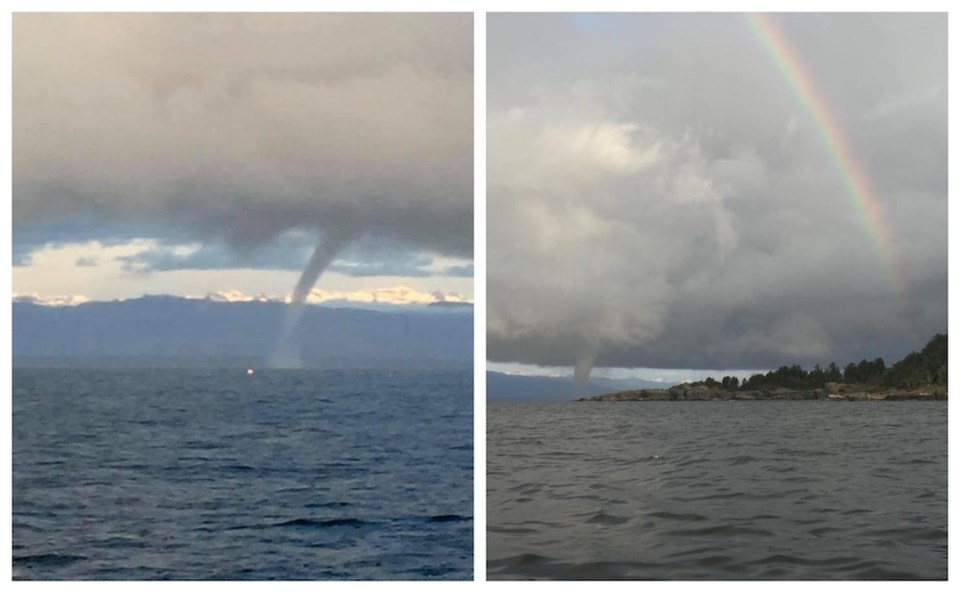 A sizeable waterspout was spotted off the southern coast of Vancouver Island this week as a vibrant rainbow arched overhead on June 9, 2021. Photo via Julie Leon / Facebook

A sizeable waterspout was spotted off the southern coast of Vancouver Island this week as a vibrant rainbow arched overhead.

Locals took to social media to share images of the waterspout as it moved through the Strait of Georgia on Wednesday (June 9) morning. Some people said that there were more than one of the whirling columns of air and water mist moving across the region, too.

In a Facebook post on the Powell River Message Board, Julie Leon wrote that there were "lots of water spouts out there this morning." She also shared three images of waterspouts and one of them features a vibrant rainbow.

Have a look at some images of the waterspouts.

taken from Powell River - photo credit to unknown PR resident (shared on FB page). Legit (videos of it too). pic.twitter.com/NlDvJmQrkV

A funnel cloud was spotted over #Comox this morning. Not something we see very often here!@CHEK_News #bcstorm #BCwx #weather #VancouverIsland #YQQ

A pair (only 1 in this video by Kevin Knutsen) of waterspouts were spotted off the tip of Texada Island this morning at ~5:45am. A #Waterspout Watch remains in effect. Waterspouts are tornadoes over water and should be with the same precautions. #BCStorm pic.twitter.com/9FfWT3oes7

Waterspouts in B.C. and beyond

If you've ever seen a waterspout moving across a B.C. lake, you may have been somewhat alarmed.

But as much as they look like their decidedly destructive relatives, some waterspouts are a far cry from tornadoes. However, they still carry the potential to wreak havoc--especially for seafaring folk.

In fact, Environment Canada meteorologist Armel Castellan told Vancouver Is Awesome in a previous interview that supercellular waterspouts have actually been responsible for sinking ships. That said, the ones we typically see in B.C. don't usually pack that kind of power.

"The general point is that [waterspouts] are in the family of tornadoes. And that sometimes we differentiate between a non-supercellular tornado on the water and a tornado on the water, meaning one that is super-cellular that can perhaps migrate to land and cause a tornado," he explained, adding that these types of events are more likely to happen back east, such as on the Great Lakes.

In B.C.'s case, Castellan noted that the first and last tornadoes happen in B.C. in the spring and fall, when conditions are favourable. However, they typically don't make it to land and are not "catastrophic."