When Patti walked into the room, John wept with joy

Love can find you anywhere, at any time--even when you're least expecting it.

For some people, the spark is immediate and undeniable. For others, it's a slow ascent to a higher affection.

For two couples on Vancouver's Downtown Eastside, it was fireworks from the moment their eyes met.

Doreen and Robert: “I thought he was beautiful."

Doreen and Robert met nine years ago and fell hard. They are residents of Victory House, a licensed supportive home in the Downtown Eastside for people with mental health challenges, and were introduced by a nurse.

As a resident of Victory House for the past twenty-two years, Doreen is quick to recall meeting Robert. “The nurse introduced us in front of the medicine cart,” she said. “I thought he was beautiful."

Robert recalls that Doreen was the only one who would talk to him when he arrived. They “hit it off great from the beginning and carried on from there.”

As with any healthy relationship, the lovebirds are there for each other. Robert helps Doreen with her finances, her banking, and her general paperwork - while Robert appreciates “the way she [Doreen] handles herself. She doesn’t blame me too often.”

Meanwhile, Doreen is smitten with Robert: “He’s very handsome, very intelligent. He’s always the same. He has a lot of qualities.”

“Robert always takes care of me. He really does care about me. It’s the closest I’ve ever been to love.”

John and Patti: "John saw me and he fell in love with me."

Love can be pushy. Cupid’s bow can strike hard and fast, without warning.

Patti was a resident of Cordova House, a supportive housing residence for 66 residents in the Downtown Eastside, when she met John.

“John saw me and he fell in love with me,” wrote Patti, a long-time Cordova House resident. Patti, who is deaf, told her story through writing and signing.

Patti said she has overcome significant challenges and was previously married to a man who abused her.

John was different. “John (was) good to me and a sweet and gentle man. He always spoiled me,” Patti wrote.

After John became terminally ill, he moved into May’s Place hospice. May’s Place is the only hospice in the Downtown Eastside and the first hospice in Western Canada. Patti wrote that John liked May’s Place  “…because [staff are] kind, and it’s comfortable.”

Patti spent every day by John’s side. In 2013, when he asked her to marry him, she said yes.

When Patti walked into the room, John wept with joy 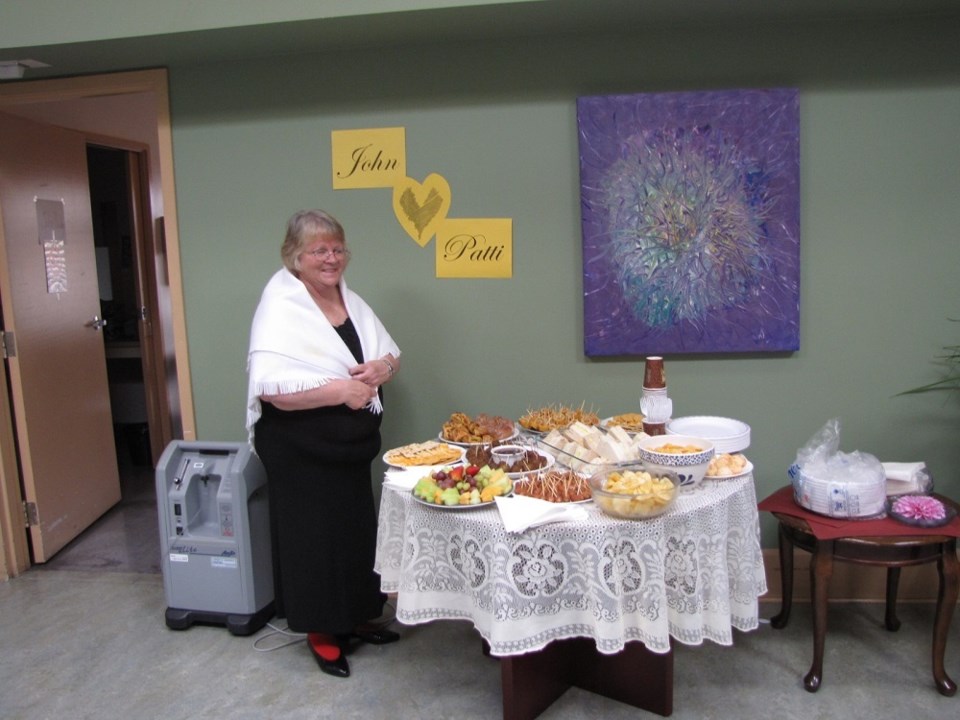 May’s Place’s staff arranged John and Patti’s wedding. Donations were gathered to pay for their wedding rings. The team helped Patti find a dress, arranged her wedding bouquet of dahlias and prepared food for the party.

As Patti walked down the hall of May’s Place - the wedding aisle - she was nervous, happy and excited.  John waited for her in his bed, his son at his side.

When Patti walked into the room, John wept with joy.  Patti used sign-language to tell John again and again that she loved him. “I know you love me,” John responded each time, “I got the best lady around. Everybody loves you.”

Laughter swelled as guests gathered to cut the cake, decorated with a cake topper loaned by a care provider from her own bridal shower.

“We help people achieve what’s important to them,” said Vivien McTavish, Clinical Practice Lead for The  Bloom Group hospices, “so each day is the best that they can have.”

Since 1961, The Bloom Group has led many of Vancouver’s most progressive social services to reduce homelessness, provide end-of-life care for individuals with mental health challenges and addictions,  ensure women-led families in crisis can stay together as they rebuild their lives, and provide financial services for seniors who are no longer capable of managing their own finances. Its ‘low-barrier’ services are inclusive and available to all individuals in need, regardless of their circumstances, and without conditions.